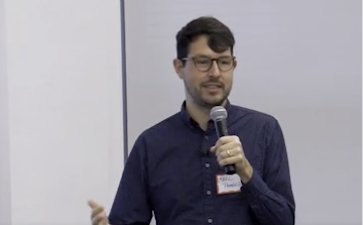 Cultivate a Culture of Action to Drive Your Team Forward

Marc Uible is VP of marketing at Threekit, a Chicago startup whose software platform enables companies to create interactive 3D, photorealistic images, and augmented reality without the need for traditional photography.

Marc talked about how his team turbocharged their pipeline by developing an action-oriented team culture at our October 30, 2019 Here’s How Startup Marketing Conference.

In case you don't have time for the full download, here are our favorite takeaways from this talk:

Did this list pique your curiosity? Read on for a complete transcript of his presentation.

Hi, everyone. My name is Mark Uible. I'm the VP of Marketing at Threekit. Today we're talking about how to create a culture of action to double your pipeline. What I really mean by “culture of action” is a culture around speed.

A little bit about me: I was an entrepreneur for a long time, running an event company here in Chicago. I learned that I probably didn't have all the skills I needed to take this idea that I was growing and turn it into a global movement, so I went to the mobile payments company Braintree, which was then acquired by PayPal.

I spent five years there and eventually grew to run the global go-to-market team there. Six months ago, I jumped ship to lead the marketing efforts at this new startup here in Chicago called Threekit.

A little bit about Threekit: We are a visual customer experience company. What does that mean? It essentially means that if you sell a physical product and you have a lot of them (or if you have a really complex physical product), it becomes difficult to visualize every aspect of that.

Crate & Barrel is a customer of ours. Crate & Barrel has a thousand sofas. Every sofa can come in 12 different fabrics, 13 different colors, and you can choose between six different legs. It becomes very difficult for Crate & Barrel to say, “Hey, buy this $3,000 polyester, pink sofa. We haven't made it yet.”

No one's going to buy that $3,000 sofa unless they can see exactly what it looks like. With our technology, Crate & Barrel uploads the design files – like a CAD file – for their sofas, and we automatically create photos, 3D objects, or augmented reality of that product in real time.

I'm just gonna start with the biggest objection that a lot of us marketers have to moving really quickly. And that is, “I don't want to make a mistake. What if we make a mistake?"

This past weekend, my wife Maggie and I were in New York City for a wedding. We were just there for 24 hours. Maggie left her cell phone and her wallet in the Uber. This was right as we're heading to the wedding.

The Uber had already driven us an hour and a half to the wedding, so it was already kind of a mess. We couldn't get ahold of the Uber driver during the wedding. We had to leave the next day on a flight.

Maggie is freaking out. How am I going to get on the flight? What if they stole my identity? I lost my thousand dollar iPhone. There's tears.

And I think this speaks to this culture of action a little bit because over the next 36 hours, the Uber driver got back to us. They got it. They send the wallet and the phone to the hotel. The hotel is sending it to us. Her identity isn't stolen.

We got to the airport a little bit early. They asked us all the necessary questions. We boarded the flight. Everything's in the mail. And even if she had lost it, you have insurance on your phone, et cetera.

So why am I telling you this story? Basically the idea is that just like this story and in marketing, almost everything we do is fixable. It's fixable really quickly, and it's not that bad.

To get over this objection of, “Oh, I don't want to move fast. I'm scared. "Or, "What if you make a mistake?” Almost everything you do is not that big of a deal, and it's fixable.

I came in six months ago. There were three things we needed to do:

We needed to double the pipeline. We needed to create and scale a revenue engine because these three things are going to drive X pipeline every month, and we're going to do this forever.

1: Establish speed to lead as a non-negotiable under 5 minutes

The first one is the clearest thing if you run a software business. Establishing speed to lead is the easiest thing you can do to win.

When a lead comes in, if you're not responding to that lead in under five minutes, you are making a huge mistake. This is a non-negotiable for my entire team.

If a customer is like worth $50 to you then, fine, do something else – but we're talking about average contract values of 50 grand or 100 grand. You need to get in touch with that lead in under five minutes, almost 24 hours a day. So that's a non-negotiable.

Number two is to execute on a rolling thunder PR and content strategy. What this means is every six weeks – we work with Propllr and we've been thrilled with them – we’ve got a new idea that we are actively pitching to the press. After six weeks, we're killing that idea and we're moving on to something else.

That means product launches and quirky ideas, but we're going to put everything into this idea, and after the six weeks it either took legs or it didn't. I'll hit on some of the results in a minute but they’ve been phenomenal.

And the same goes for content. Push content really hard. If you’ve got an idea, put it out there. Don't think too much about the blog post. Give yourself an hour to write it, or work with a strong vendor or an agency partner and get that thing out there.

If you want to execute quickly and if you want to get really good results, you need to work with people that are in your mindset, so that you can talk to them like they’re a player on your team.

I've worked with tons of agencies in my career. Oftentimes, you kind of get on these weekly catch ups where you're just going through status. It's really dull, and no one's asking provocative questions like, “What did we actually move the needle on this week?”

When you start to have vendors that are not vendors but partners, where you’re talking to them like a real teammate, you start to move the needle. And then you start to push them to say, “I don't care if you make mistakes. I'd much rather you make a mistake than not take action on something.”

Which brings me to number four, which is Parkinson's Law, which is work expands to fit the time that you give it time to do.

This basically means if you give yourself five days to do a project. It's going to take you five days whether it would have actually only taken you a day to do.

What I do with my team and what I do with all of our partners is time bound things to make it a little bit uncomfortable.

If someone says, “Hey, I need a day,” well, what if you actually just gave yourself two hours? Because I bet you that in two hours you could get 80 or 90 percent as good a result. It's not going to take you a day, and we're going to move really quickly and, again, it comes in number five, which is a requirement to push on Parkinson's Law, which is never punish action.

And you know what? We're gonna be able to capture data all around that says, “Did this thing actually work or was it actually not working?”

So that's a requirement. If you want to push the team, then you can't say, “I made a small spelling mistake, there's a little bit of a design flaw, or this form didn't convert as well as we thought.” Okay, let's go on and fix it tomorrow morning.

We doubled pipeline and more than in the last five months.

The second step again I come back to it it's so simple but you just have to do it. Leads that are contracted in under five minutes have a 73 percent conversion rate to qualified opportunity.

Again, for a software company like us that has a very high LTV, this is super important. Leads contacted in over five minutes have a 44 percent LTV, so if you're talking about simple things you can do, that's a must-do.

Again, it's this rolling thunder approach that if every six weeks, you've got something new and you're pushing it really hard, you're going to start to see results.

Sometimes you'll totally miss, but a lot of times you'll start to hit and then also press starts to hear about you: “What's this Threekit company doing? I didn't cover that article, but maybe I'll cover the next thing they talk about because I keep hearing about them.” The same goes for your customers.

Become a content and syndication machine. We're hitting a 45 pieces a week. What that means and the reason we're able to do that is that if you had to pay Propllr or another outside agency, you're going to be paying them a lot of money if you want to do four or five pieces. But if you tell your team, “Hey, just give yourself an hour,” you're going to get pretty damn good at writing blog posts, filming a short little video, or making a little infographic on Canva.

Almost anyone can do it, and it isn't that hard. Eventually, over time, you'll start to see what people are clicking on, where are you resonating, and you get results out of that.

And finally, less fear. There aren't many rules on my team. Literally the only rule is to take action. Don't wait on things. If you make a mistake, I don't really care. We'll talk about how to fix that later, but there's not going to be punishment. That's a pretty simple rule for operating.

5 Tips for Founders: How to Use Twitter to Get More PR for Your Startup
Explaining Your Startup Job to Your Family over the Holidays
Previous Post Next Post