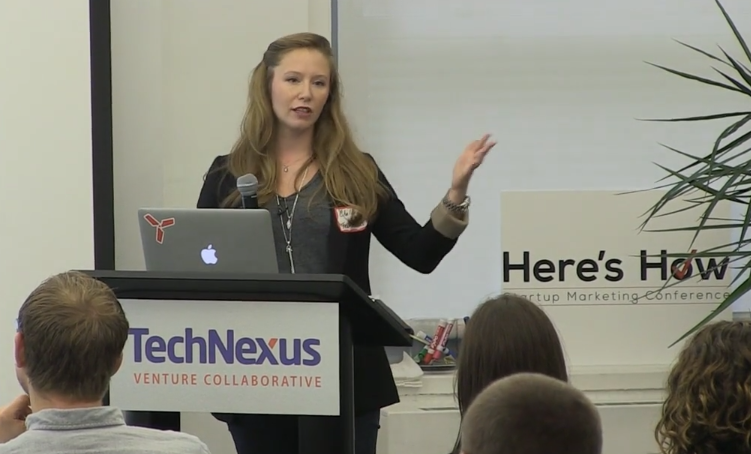 Here’s How I Created a Contributed-Article Thought Leadership Program

Read on for a transcript of her presentation from our September 19, 2017, Here’s How Startup Marketing Conference, where she created a contributed-article thought-leadership program.

Hi, I'm Challin Meink. I'm the Marketing Director for TechNexus Venture Collaborative. We help enterprises invest and pilot with startups. That's the clearest way I could come up with to explain what we do. What we say we do is connect enterprises with entrepreneurs – basically, working with corporate partners to source, identify, incubate and accelerate startups. It's a little bit of a VC, it's a little bit of strategy and it's a little bit of consulting. Through the facility here, we have mentored and incubated over 500 startups. We are a little bit different than others like us because we are dealing with actual investment and commercialization.

I joined TechNexus about a year ago, during which we had a little problem of not knowing who we are and who we want to be. For the first six months of my job here, it took a lot of refining. It took figuring out who we wanted to use as our spokespeople and what we wanted them to say. And then as we got more clients and our CEO got too busy to do media, I realized that if we're going to get media attention we have to activate an army of advocates within the organization. Because we do strategy, venturing and commercialization, those were really the three categories we should be focusing on and our CEO may not be the right person for each of those.

So, I've been working with the team to figure out who we can activate and I'm happy to say today we secured a contributed article with Medium's “Hacker Noon” outlet, which has around 175,000 followers and helps us link back to our site. But I got that placement for a venture manager, he's not a CEO. He has a podcast of his own. It's not super well-followed, but this is the first step in getting him recognized so that then I can pitch him to Wall Street Journal and New York Times and have something for that reporter to look back to to see what he has to say and why it's important. That's the basis for why contributed content is important to me.

Contributing content really lets you control the messaging and control the headline. That way, if you're a PR person, your CEO doesn't flip out when the headline also mentions your competitor, which is horrible but also happens often when you have an interview.

Contributed content is a great way to start activating that army of advocates and start to get content out there that lines up with your messaging. Here’s how I utilize it.

1.  I take the time to know my audience

It's obvious sometimes but you may battle your CEO on this. They might say, "I want New York Times, it's the only thing I want, that's it.”

And to this you’ll say, "We're trying to close deals. Not every New York Times article closes deals, maybe we should focus in IOT Agenda, which is also not sexy, but closes deals." So know your audience and be able to support your theory to your leadership.

I read the news all day, every day. I read the news where I know my audience is reading, whether that's a CIO or a CTO. I'm reading that stuff. And I figure out what they find compelling and what my CIO prospects find compelling. That means looking ahead for trends that might be impacting their business or just giving some insight into customer anecdotes that help them help their customers.

I find reporters I think are going to tell a really compelling story and I make sure I know what my reporter's opinion is. Making sure that you're aware of how they cover things is really important.

That means targets, reporters and syndications of those outlets and really getting up close and personal with all of the aspects of the pitch you're about to send.

4.  I draft compelling media pitches with a human element, not an ad, that shares a POV

When you draft your pitch, it has to be really interesting to that individual, to that publication and to that publication's audience because if you're just going to tell a story about how great TechNexus is then I don't even want to read that. You just have to be realistic with yourself and if that means maybe not showing your spokesperson exactly what the end-result pitch is, I say go for it.

I once pitched Inc. and secured a contributed column for, and you're not going to believe this, a client that did business process outsourcing. Literally, it was a company that ships jobs overseas. But the story was really interesting because one of the main countries that our founder focused on was the Philippines. He is of Philippine descent and is an American entrepreneur doing a really great job building business. Find a way to humanize the story and also have a little bit of the “why that business matters.”

Also remember that it's not an advertisement because that's pay-per-play. And have a unique point of view. If you're saying the same thing that every other person is saying, why not read the other article from the guy who everyone knows? You have to create some sort of incentive for your reader, whether that's the reporter, or the publication, or their reader to find your story compelling.

5.  I send the pitch and remain patient

Simply press send. Usually you'll hear nothing, sometimes you'll hear something in 30 seconds, sometimes you have to follow up a week later and then you have to call. It depends, because I think we as the media, as PR people, have to remember that the media is in a really tough time right now. During Q4 last year, the New York Times fired 300 people. All these people are stretched really thin and they're getting hundreds and hundreds of pitches a day. Some of them are really horrible and some of them are really great. You want to be the really great one and you want to give them something that they can bite on.

If they want to run your piece and it's something that's timely, which we hope it is, you need to have a bio, a headshot and some sort of link back to your company. Have all of that ready to give the reporter to include with a contributed article because you want the link back, that’s the goal. Make sure you're prepared.

We have a regular contributing profile for Forbes and Entrepreneur. We also work a lot with Agenda, which you may not know because it's not as sexy but it's also cool for anything connected. We also have a smart cities focus, so that's neat, and we even have some oil and gas regular contributed articles, which is one of our key targets. Whatever your target audience is in, whether it's an industry or a title focus, I guarantee there's a publication that wants to hear what your company has to say as long as you're telling them something important.