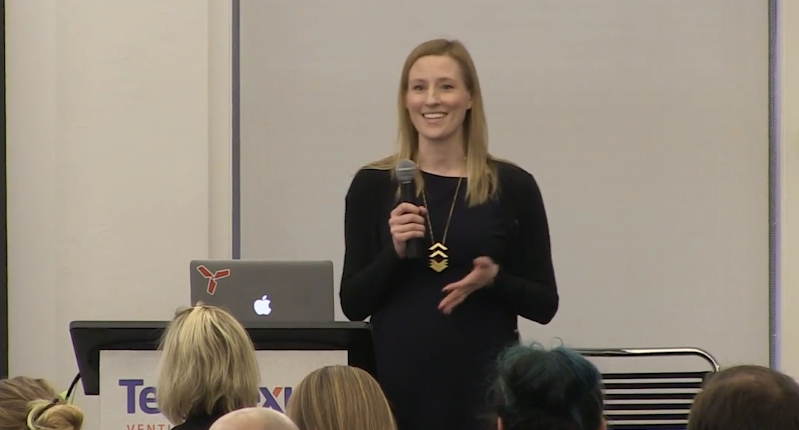 Kristen Cho is the Vice President of Marketing at SpotHero, a Chicago-based parking reservation application.

Below is a transcript of her presentation at the January 27, 2017, Here’s How Startup Marketing Conference, where she shared how her company created an integrated marketing campaign in less than four weeks.

My name is Kristen Cho. I'm the VP of Marketing at SpotHero. For those of you who may not be familiar with SpotHero, we are the nation's leading parking reservation service with 3,300 parking garages, lots and valets across the country. We've come a long way in the last five and half years, since we were founded in Chicago as an AirBnB for parking where we were selling independent seller spots around Wrigley Field. We just launched in 10 additional markets as of yesterday and now operate in 32 cities around the country, so wherever you're looking for parking, you can find it with SpotHero. Though we've been around for a little bit longer than a lot of the startups presenting here today, we’re still in a place where we oftentimes have to do a lot with very little time, resources or both.

We had a holiday campaign planned in September and it was pretty conservative, utilizing a lot of the tactics and strategies with which we had historically seen success. We came back from Thanksgiving and our CEO gathered myself and a few other leaders from the company and said, "I have a new mission for you. We are going to really accelerate growth during the month of December so I need you to put together an integrated marketing campaign and I need it in market basically tomorrow."

We were coming back from Thanksgiving, so all of this happened on November 30th. This was a big challenge because that didn't give us much time to plan, strategize, run the execution and add value. We only had about four weeks to do it. So what did I do?

Daily distractions like checking email and maintaining social profiles had to be put on hold.  We had about 48 hours to plan this entire campaign so we could move on to the strategy and execution, so everything else was just put aside during this period of time. I think this was one of the big reminders that you can get so much done in a very, very short amount of time if you just focus.

2.  We had speed-dating brainstorm sessions

We didn't give people a lot of time or preparation and we didn't hold big group sessions. We just took two people aside, who were from completely different functions in the company, and had basically a no-holds-barred brainstorm where any idea was on the table. We let them brainstorm for 20 minutes and then they were done and went on to the next one, then the next one, etc. So I had a bunch of really fast speed-dating sessions to get as many ideas on the table as possible of what we could do for our holiday campaign. Once I had probably about 120 ideas, I sat down with a few core members of the marketing team and we refined them to put together a strategic plan that we could pitch to our CEO and our COO. So we went through and we refined the ideas, and we did a little bit of pressure testing, too. We had some crazy ideas like parking reindeer because we're a parking company. By the way, in case you ever have to do it, finding reindeer on December 1st is really, really hard.

There is a lovely woman on my team who has the most beautiful lilting Australian accent. She called every reindeer farm from here to Ohio, even a few places up in Canada, and all the reindeer were booked. It was just really sad for us. Then another woman on my team was like, "You know what? I know a lot of people." So she Snap-chatted, "Need reindeer stat, snap me back!" Within an hour we had a place to rent reindeer because of Snapchat and our networks there. We didn’t wind up using the reindeer but it was an exercise in what crazy kinds of things are possible.

3.  We itemized and budgeted our ideas

I sat down and wrote out the strategic plan and it focused on a couple of things. One, even though we're pretty well known here in Chicago, we still have found in our brand awareness surveys that we're not known by everyone, particularly people in the suburban areas. So we wanted to focus on brand awareness, encouraging trials, and then getting more repeat usage from our existing user base once they've tried us.

Those were our three focuses of the campaign and a lot of the tactics that we came up with related to one of those three things. We had a lot of crazy ideas but when we itemized and budgeted out everything, it really helped us prioritize the ideas we had because not everything was really expensive. In fact, one of our best ideas was a PR ploy in which we said we would pay, for one day only, every parking ticket in Chicago. We got picked up on three local news stations, there was a write-up in the Tribune and tons of commenting on social media, and it barely cost us anything because we gave people two weeks to submit their tickets and just a few people did. We spent very little but got a ton of pickup. So that budgeting, the exercise and putting all of the details in a plan really makes a difference and it allowed us to sell in some of the bigger and crazier ideas that we did as well.

4.  We got the company engaged in the idea

At this point we had been working on the plan for about four days so we got the entire marketing team together and motivated them. Pretty much everyone on the team was engaged in some way and not necessarily in their core function. For instance, the CR manager was the person who was running the PR tactic about Parking Ticket Rescue. So everyone was really being used in multiple ways with multiple functions across the organization. Our SEO manager figured out how to sell gift cards, which we've never done before. So there were a lot of quick hacks that we did to get things into market in a very short period of time. Each team really had to focus on the different things that they needed to do to get the plan into action and then we just started executing. So, the types of the things that we did really were across the board from awareness down to pushing trial and repeat activation.

We did the Parking Ticket Rescue, as I mentioned earlier, and we did a lot of street team activations. We had about 82 blue santas in Chicago outside of Metro stations and in the loop on Michigan Avenue passing out cookies and promo cards and we did activations at 1871 at Lincoln Park Zoo. We partnered with Waze and gave away free parking one Friday. We parked Santa's sleighs all over the city of Chicago which was a good change from reindeer and a little easier to execute. So I hope you saw us in the month of December because we were out and about everywhere. We plussed up our digital and radio advertising and had some great endorsements from some DJs we'd historically worked with and really pushed into all of the channels that we had previously been activating. Then, finally, we did an incentive push for newer users to get them to their second and third use of the product while also re-engaging our base and getting them to park with us throughout the month.

It was a crazy period of time. We even launched our first sweepstakes and then loved it so much we did a second one. It was a good learning experience for us, because we realized you don't always have to give away a big prize. We actually had two prizes, and the prize that had a value of 10 percent of the original prize actually got more engagement. So I think that's a note for us as we go forward, we don't always have to spend a lot of money to make a big impact.

We're all about doubling our growth and continuing to grow, so at SpotHero, that’s our mantra. We want to be doubling the company every year, and with this campaign, we did it.