It’s May, which means a lot of new graduates are looking for work. And with unemployment rates for tech and business roles much lower than they were a year ago, now is a good time for anyone in the industry seeking a change to apply for new positions.

But what does it take to actually get hired?

In this post, we explain how each member of the Propllr team found our way here – and offer some handy takeaways from our experiences (plus a note on how our hiring practices are evolving).

After getting my start in PR at a larger agency in the city, I was secretly hoping that I would find a smaller team to join – somewhere I could really make an impact.

So I was thrilled when a recruiter contacted me about my interest in joining the team at Propllr. At the time I joined, there were just five of us. Today we’re up to 12 Propllrheads (and hiring for a 13th!). It’s been such an exciting journey to watch the team and agency grow, and very rewarding to play a part in shaping the trajectory of the agency.

I had a great chat with Mark a week or so ago, and his insight helped me make the final decision. Following your heart, and all that.

Anyway, if you're in need of the odd freelance writing work anytime after August 4th, feel free to reach out.

I'm glad our paths crossed via Insureon! I hope all is well at Propllr!”

He introduced me to some people he knew… but then made me a different kind of offer: how would I feel about joining Propllr part time (with benefits)? He pointed out that working part time would let me work on my independent projects while also letting him test out the viability of having a content marketing arm of the company.

Reader, I felt GREAT about it.

*A novel. Of course I was working on a novel.

When I moved to Chicago in 2016, I knew I wanted to make the transition from journalism to PR – it seemed like there was more opportunity in PR than in journalism. So I started networking among friends and family in Chicago.

I eventually met with a marketing and communications leader who kindly connected me with other communications and PR pros she knew in the city. One of them was Josh Inglis, the founder of Propllr. Josh and I met for coffee at Sawada in the West Loop.

I expected it to be a simple introductory meeting, where I asked him about his career and his take on the industry generally. But we got to talking, and things just clicked – before we’d finished our coffees he said, “You know, you could be my director of media relations.”

We talked more and more over the ensuing days. I came into the office and met the rest of the team, and did a longer, more formal sit-down interview with Josh and other Propllr leaders. Soon enough, I had the job!

My story is not very cool or exciting.

I saw the job on Built In and decided to apply. Next thing I knew I got an email from Josh!

There's really not much else to my story… I think my previous PR experience at big agencies and experience running marketing for a startup kind of seemed like the perfect mix when it comes to a startup PR job (which I obviously played up in my cover letter and interviews).

After working at huge companies with over thousands of employees, I wanted a change of pace and to work at a smaller company where I could create a bigger impact. This led me to seek out job postings on websites like Built In Chicago, where I stumbled across Propllr.

What immediately stood out to me was its unique hiring process. Instead of just sending in a résumé, I had to answer four questions that would set me apart from other candidates. Also, I think Josh was the first person to actually call my references. This led me to believe that this was a company that doesn't play by the rules (in a good way) – and I was right!

When I was still in college, we had an “assignment” to research (creep on?) a public relations alumnus from our university on LinkedIn. The objective was for us to start thinking about our future career paths by seeing how former students were using their degrees.

I knew I wanted to live in Chicago, and I came across a K-Stater (Kansas State University alumnus) at Propllr. Working with startups and tech companies sounded cool to me, so I first became familiar with Propllr in that way.

Fast forward a year or so, and I had to do that assignment again, only in real life. I came across a posting for my role at Propllr and had an instant flashback – wouldn’t it be cool if this came full circle?

Rather than sending a canned résumé and cover letter, I tried my best to tailor to the actual position and write something that would set me apart (it actually works!). I interviewed, enjoyed speaking with Josh and the team, and decided to go with Propllr over a couple larger agencies.

I was drawn to the small size (opportunity for big impact), general vibe of the team, and an efficient-yet-easygoing culture that contrasted with a lot of agency horror stories I had heard.

Like others here, I found the job listing for my current role on the Built In Chicago site. I'd always been interested in the Midwest and startups, ever since I interned at the Youngstown Business Incubator in my hometown of Youngstown, Ohio (the greatest place on earth). Exhibit 2: The Greatest Place on Earth

The Propllr listing got my attention because it looked like all the things I liked – big-picture thinking, flexibility, and autonomy, but with a clear commitment to taking pride in the work and doing it with excellence. Turns out my initial impressions were right!

I met Brenna at a poetry reading in 2017 and we started our own monthly reading series together the following year.

In fall of 2018, Brenna asked if I'd be interested in applying for a part-time content marketing role, as Propllr was looking to expand its content offerings. I wasn't ready to leave my full-time job for part-time work, but a few months later, when Propllr decided it needed another full-time writer, I applied. The rest is history!

I had the vague notion that I was interested in the startup world after interning at Northwestern's student incubator, so I browsed Built In Chicago when I was applying for jobs, which is where I found the Propllr listing (for a media relations associate).

Josh thought I’d be a better fit on the content team, and so passed my résumé on to them. The rest, as they say, is history.

Fun detail: I had such a good feeling after the first phone call with Josh that I lied and said I was in Chicago when I was really in New York at the time, so I actually flew out for the interview.

I was working at a medium-sized PR agency in Chicago when my significant other sent me a link to the Propllr website, with a note that said, “this has your name all over it.” I was intrigued.

After some sleuthing, I was super curious about the company’s client base and how PR for tech and startups even works. It was that curiosity that led me to connect with someone at Propllr, Clay Kuntz.

I reached out to Clay via a cold LinkedIn email (though it was a warm message, I assure you), purely to set up a chance to pick his brain and learn about his journey. We met for coffee about a week later. After chatting with him for half an hour or so, he revealed that they were looking to hire (unbeknownst to me – I swear!). He sent me the Built In Chicago job posting, I applied, and quite frankly it seemed too good to be true.

I was looking for a Chicago agency where I wouldn’t be just a number in a crowded office building, but an integral part of a team. Once I met Josh, and started the interview process, I didn’t want to look anywhere else. Luckily, I didn’t have to. 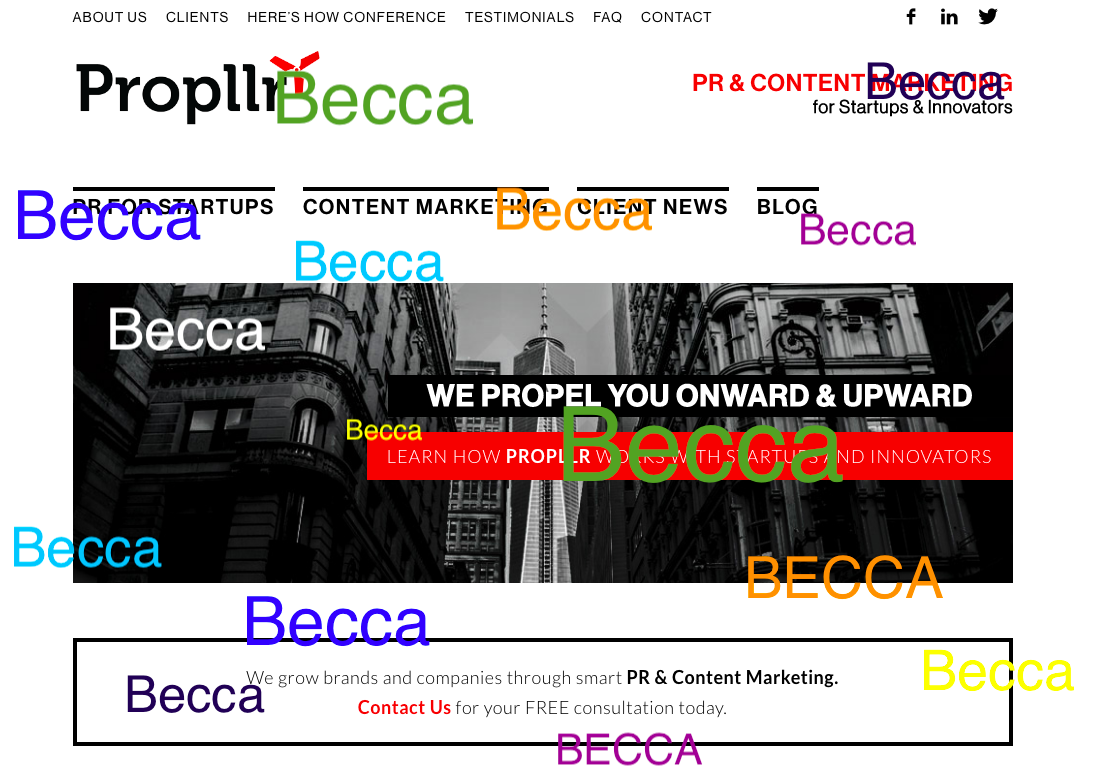 Exhibit 3: Propllr’s website, according to Becca’s significant other (artist’s rendering)

I was job searching and networking when I came across a woman from my area in the same field as me (editor's note: that woman was our very own Jillian Smith). At first, I reached out to her for an informational interview to get advice about the industry.

After our call, I sent her my résumé so she could give me some pointers. Instead, she called me right away to tell me that the company she worked for – Propllr – was hiring.

After talking to Josh for the first time, I loved the energy and what Propllr represented so I was thrilled from the start. I am so happy to be a part of the team and very excited to get started.

There’s always a certain amount of luck in the job-seeking process, but there are also some helpful takeaways lurking in these stories. Here are five things that worked for us (and that we think can work for you):

A Note about Hiring at Propllr

We thought doing this blog post would be a fun way to reminisce, especially as we grow and approach our tenth anniversary. And it has delivered. But it’s also highlighted some issues in our hiring process that we need to address as we aim to create a welcoming and diverse environment for top talent.

One, networking has clearly played a part in several people joining the company. But what about talented folks whose network doesn’t overlap with ours? How are we presenting ourselves to them? Can they find us? Are we part of enough networks?

Built In Chicago is a great way to find people interested in startups, but what about top talent that doesn’t yet know how great it is to work with startups? How are we finding that talent?

Going above and beyond to get our attention certainly works, through informational interviews and even flying in for an interview. But what about people who may not have the financial resources or savvy to take those steps? What about the people without mentors to suggest such things? How do we find that talent?

We don’t have any good answers yet, but we are working to move in the right direction. We are proactively reaching out to groups that can broaden awareness of our opportunities. We are posting our jobs on more boards, from sites like Indeed to networks like ColorComm and alumni groups. And we are taking more time to look at résumés, to try to spot things in applicants they may not have thought to spotlight themselves.

We’re dedicated to making our hiring process more equitable. And we’re always open to feedback along the way.

Want to Start a Podcast? 4 Insights from Unbossed’s Marina Malaguti
How and Why to Write a Case Study
Previous Post Next Post