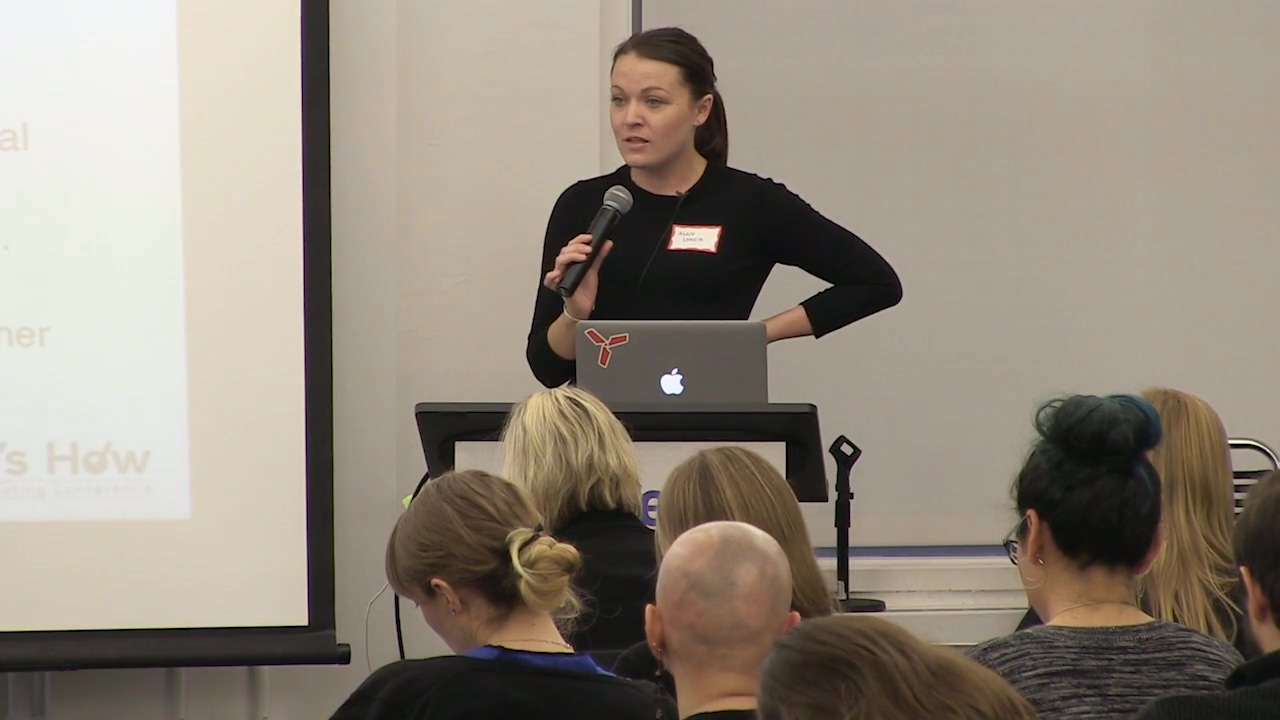 How project44 Marketed a Supply Chain Solution with Thought Leadership

Read on for a transcript of her presentation from our January 27, 2017 Here’s How Startup Marketing Conference, where she describes how she built a marketing campaign for an unknown freight and logistics solution through education and thought leadership.

My name's Ally Lynch. I run marketing at project44. project44 is an enterprise SaaS company that provides network connectivity to the global supply chain.

I'm sure you guys are not experts on freight transportation and logistics. It's quite a sexy topic. I'll give you a little bit of background about what you need to know when you're marketing in this industry. I wasn't an expert up until a year and a half ago, and I'm still not really an expert.

This industry is very close-knit. People tend to go into freight and logistics and stay. To say it's incestuous would probably not be fair, but it's the kind of the way it is. Because of that, they're very hesitant toward outsiders. They're also pretty much resistant to change. They've been doing things a particular way for a long time, and that's fine with them.

Being a new technology platform trying to break into this industry was not necessarily an easy task. Luckily for me, what this company realized really early on is that they needed marketing to drive that task and to basically create an entirely new category within freight transportation. And that's where marketing came in.

I had the opportunity to join a company that was pretty much an industry lagging 35 years behind the status quo. We, at this point in time, did not have any paying customers when I joined. We didn't even have a live product. We didn't have a product roadmap. We pretty much had nothing.

We were five people that really wanted to change the way companies did things. And with that, we had an idea for really kind of industry-changing products, and we had the ability to bring to this market a new way of doing things that our potential customers didn't even know that they needed.

How do you create demand? How do you generate sales and revenue for a product that nobody even knows they need yet? That was our task. That was year one at project44.

We knew this product could change everything, but nobody even knew that they needed it yet. That's where we came in. It's a tough question to answer. It's a tough problem to solve. I think a lot of people would solve in a lot of different ways. What we did – and what I did – was pretty much find the most logical spot, and that was creating demand through education and thought leadership.

Luckily for me, I didn't run into a lot of problems with that. Our leadership understood the value in that, but that was really the situation we were in. [We were] convincing everybody that this was the game that we were going to play, and this is how we're going to create an entire new category for this industry.

So, what did I do? I'm going to start by telling you exactly what I didn't do, because it was hard for me not to do this.

I did not create a website, start blogging, build lead generation and inbound funnel, and then start lobbying educational content at my inbound traffic. Not because that doesn't work and not because I'm bad at blogging, but because nobody was searching for the solution to a problem that they didn't yet know they had. It wasn't time for that yet.

What I did is I started building relationships. I went to every industry expert that I could find: every reporter, every journalist, every consultant, every professor. Everyone that lived and breathed freight transportation.

I flew to New York and pretended to be in there for meetings and had coffee with Wall Street Journal reporters. I did everything I possibly could to just get to know the people in the industry that had clout. I wasn't from the industry, nobody knew who I was, and nobody cared what I had to say. Hopefully, you guys care what I have to say, but nobody in supply chain did.

I literally spent hours and days and weeks and months talking to people that cared about logistics. And I wasn't talking about project44. Maybe 20 percent of the time, I would get the chance to talk about what we were doing.

Relationships, right? You provide value, they provide value back to you. They started believing in my movement and they became a critical part of my strategy.

I know I'm still at number one here. There's a reason why I haven't even brought up writing yet. You would think thought leadership, content marketing, education writing is important. It is really important, but I couldn't forget about those people – and I will say it over and over and over again because it was so important for me – without them, I couldn't do the rest of this.

2. I developed a thought leadership-based editorial calendar & identified key leaders within the company.

Finally, with them on my side, with them believing in my movement, I was able to do everything else. I was able to create a thought leadership-based editorial calendar, identify the key people within our company that were going to be our strong advocates and our brand voices to the market, and then I wrote.

And I wrote, and wrote, and wrote. Being a marketing team of one, I also leveraged every single word that I wrote. I would write one piece of content, and I would re-skin it for seven different publications because it was the only way that I was going to actually be efficient.

The cool thing that I did – without even knowing that I was going to do it, but in this presentation, it sounds like it was my strategy all along – I built what I just call a "Trojan horse."

I had spent all this time talking to all these influencers, and all of a sudden, they became my entire distribution network. We didn't have visitors coming to our website – nobody knew who we were – but all of a sudden, all of these reporters, journalists, and consultants were talking about us.

They became my vehicle to create an entire category. They basically created the category for me: I provided information to them and they pushed it out. That's the start of a really strong thought leadership and education strategy.

That's the basis of that pillar of PR, and we didn't have a PR firm doing this. We were doing it ourselves because we were boot-strapped and we had no money. But as we gained momentum, we brought a PR firm in and we started to figure out how to scale this.

There was no silver bullet of content. I didn't create one white paper and change the whole industry. If anyone can do that, please let me know – I'll hire you on the spot. I'll do absolutely anything to bring you on to my team.

It was a lot of small steps: building relationships, bringing reporters on board, and writing really strong content that didn't promote project44's project but promoted our idea in the industry. And with that, we built an educational foundation. We built a need within the category.

Once we got there – and that was at least 12 months – we were able to say, "How do we scale? How do we optimize? How do we build a marketing sales funnel that's going to capitalize on all of this thought leadership and education that we've been pushing out?"

6. I used tools and repeatable processes.

But we didn't do that for 12 months after I started, and we're just starting to get really good at that. We're okay right now. We're getting better.

What were the results? I can talk about two different sets of results: There's my PR results and my sales results.

We grew our share of voice. We were in the Wall Street Journal. We were in CIO Review. We were pumping out lots and lots of content. And thought leadership was a big part of that – it wasn't news announcements, it wasn't product placements, it wasn't sales pitches – it was us talking about why the industry needed this product.

And that parlayed into sales success. We grew lead generation 337 percent. That's not all because of thought leadership. I'd love to create that ROI, but it was a combined effort. PR campaigns were our top referral source.

The other one is just basically a survey result, but 75 percent of the time new business will tell us that they heard about us by reading a thought leadership or education piece. I can't really quantify that, but that's value, that's there, and that's really important to us.

I joined this company to shift a paradigm in a very outdated industry. That's why I went into freight and logistics. It wasn't because I like trucks or any of that – it was because I saw an opportunity to really change the way an industry functioned. Being able to be that pioneering voice in the industry is something that's really cool.

That's something that I can't put up here as a success measurement, but in my mind, that's the key for me. We've created an entire new kind of category within a market by using education and thought leadership.

Should Your Business Start a Podcast? Tips from an Insider
How to Get a Story About Your Startup on the Local TV News in 8 Steps
Previous Post Next Post