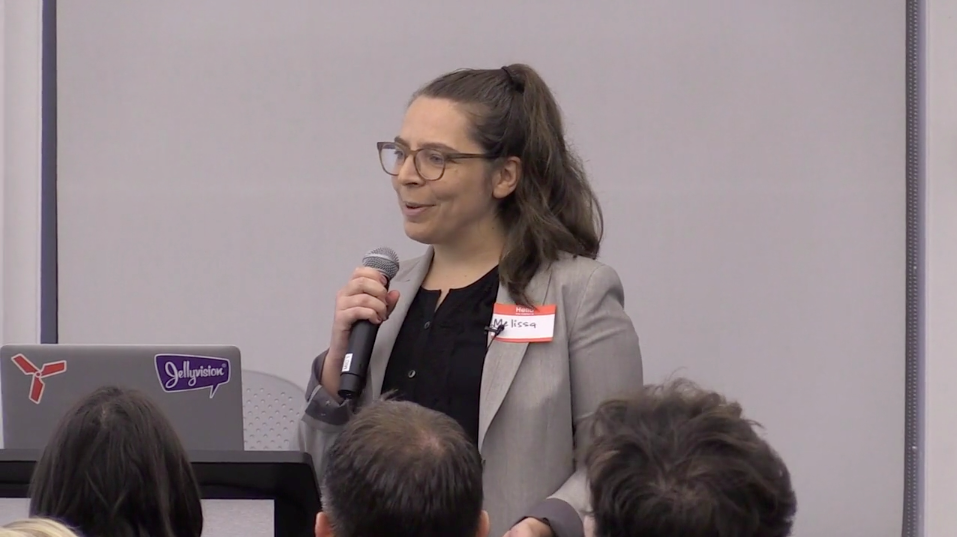 Melissa Mauter is the Vice President of Data at BallotReady.org, a Chicago-based content aggregator that provides nonpartisan information about candidates and referendums on ballots around the country.

Read on for a transcript of her presentation from our November 15, 2018 Here’s How Startup Marketing Conference, where she describes BallotReady's SEO strategy leading up to the 2018 midterms.

Thanks so much, Josh, for having me here, and hello, everyone. Good morning. Okay. I'm very excited to kick off this speaking series and I will tell you a little bit about my role. So I'm Vice President of Data at the company. I joined about five months ago.

My main task was to help scale the company from 12 states in 2016 (we were live in 12 states) to all 50 states, to make a National Voter Guide that regular people can use to vote all the way down ballot and figure out what candidates stand for, what their issues are, and then also how to vote on referenda. That's been occupying the majority of my time, and it's been nice to come down off of that.

I'm stepping in for our CEO Alex Niemczewski today, and she trusts me a lot, which is really great. She also put me in touch with our CTO to learn a little bit more about SEO. This is a really exciting opportunity for me to learn a lot from our tech team, and then turn around and tell you what I learned, which is what I'm planning to do.

Just to give you a little bit more context about BallotReady, we're three years old and we have received funding from the University of Chicago, the Knight Foundation, and the National Science Foundation. I already mentioned that we primarily create digital voter guides. We also white label products for political action committees. We make “Make a Plan To Vote” tools or voter guides for other political action committees as well.

Our CTO is from Grubhub, and he's really good at stitching together local problem sets. I think he took a lot of what he learned there to help build out our site. One of the things that I learned recently is that the site parallels a lot of the back-end database really well. There is a clear continuity between how our team organizes data along three major categories.

When they built out the site to come up with the SEO for ramping up, what we needed to accomplish in a three-week time frame, because, really, we hadn't started SEO before three weeks prior to the midterms.

We had a lot of great social traffic and great referral sources. We were really popular on social media – Twitter and Facebook. So we definitely laid the framework for our SEO by making sure we had really strong social media beforehand, as well as how it was explained.

We also had people with high page authority rankings that we were connecting back to our site, which also helped our own rankings on search engine results pages, but how we specifically built out the pages and organized them were kind of using this format for specific index pages.

So, like, ballotready.org/state, then after the state, then the county, if you wanted to see a county level race. After the county, then the position that was eligible, or up for election, or the candidate name that was running for that position.

What surprised me, or what I learned, but what made a lot of sense, is that the structures that were in place on the site in the specific URLs were actually very, very similar to how we organize our database on the back end.

We also link to other sources from the candidate pages. So how BallotReady does its research and aggregates its content for candidates is that we only use candidates as the source of information. So we'll link back to candidates' Facebook campaign pages, Twitter campaign pages – but we're not going to link back to a candidate's personal Facebook page, for example, only campaign-related materials.

And we think about five categories of data for candidates' pages: bios, issues, and endorsements are the major ones of those categories. They also have a photo, and then we consider however many web links they have as a category of information.

But that's just basically to explain when we're creating these candidate pages, we just are linking back to a big outside world of new websites that is helping us to aggregate that information, and every single thing that a candidate puts forward links back to their website, so that the user of the voter guide can see where that content was found and taken from.

So I'll talk a little bit about the results of our SEO work. For our organic search, we increased to 30 percent of total traffic for 2018, which was up from 20 percent in 2016 when BallotReady was live in only 12 states. And then, pretty quickly, we went from a couple thousand pages indexed by Google to more than 40,000, and this has a lot to do with how we structured those specific index pages.

And that is all I have for you on SEO on BallotReady. I will take a few questions, and if I can't answer them now, I will definitely get back to you with an answer after I check in with our CTO.

No SEO on Staff? Check These 4 Things
How to Get a Profile of Your Startup, According to Polina Marinova
Previous Post Next Post