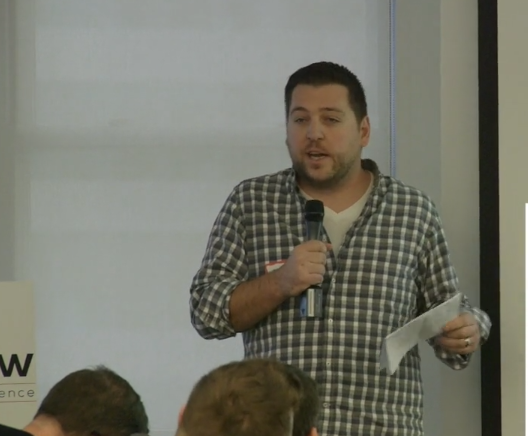 How to Increase Tradeshow ROI for Your Startup

Ever wonder if tradeshows are a good idea for your startup? How do you know if they're worth the cost and time? And if you do make the investment, how do you get the biggest tradeshow ROI? Patrick Niersbach of InContext Solutions has cracked the code.

Patrick Niersbach is Director of Marketing at InContext Solutions, a startup that helps retailers and CPG manufacturers use virtual reality to make smarter, faster and more profitable decisions. Below is a transcript of his November 11, 2016 presentation at the first Here’s How Startup Marketing Conference, where he shared his expert tips on getting the most out of trade shows.

My name is Patrick Niersbach. I’m the director of marketing at InContext Solutions.

InContext Solutions creates virtual reality solutions for retailers and manufacturers. What that means is we allow them to create new concepts in hyper-realistic simulations, both online and through VR headsets now. So, it helps them move a lot faster, they don't have to prototype anymore, they don't have to build out mock stores, and then once they build those out in virtual they can bring real shoppers in, through kind of like a video game, so a link is sent to them and first person shooter-style, they go through the store and shop for cheese. VR correlates at .9 or higher to real shopper behavior, and it's a hell of a lot cheaper that in-store research.

So, trade shows! We all love them, and we all hate 'em.

We had a problem that I'm sure everybody has, right, we were spending a ton of money on trade shows, with no idea if it was working or it wasn't working. We had a bunch of, "Meh, we had some good conversations." Throw in that our sales cycle averages between six and nine months, so do we remember if we had that conversation at this summit or at that expo, who really knows? Is it on their twice?

Anyways, if I was going to go back every year and ask for money for trade shows, we needed to establish a way to check that spend. And I'm sure my bucket of money looks a lot like most startups’ buckets of money, not very big, so if I'm spending on trade shows I need to make sure it was worth the investment.

So what we did is we went back to the beginning, focused on all the trade shows that we've done for the last two years and really looked to make sure that they were the right shows. Did we need to exhibit at them, is it more of a branding show, could we do maybe a sponsorship or can we speak? Maybe we can attend and just network, will that get us the same type of results we're looking for without that huge cost of having a booth? But we also looked at the audience. And so, sometimes as a company grows and as our priorities have changed, some of the shows we used to go to may not align with our new product offerings or what's going on.

2.  I Picked Two Shows to Start With

We wanted to make sure we're at the right shows, exhibiting or having the right presence we need. So, I picked two shows to start with, because it's very daunting to look at your 12-month calendar of trade shows and try and figure out, "Is this really gonna work?" I knew that our technology has given us a competitive advantage that we can do really something different. So I focused on creating a destination at our booth.

3.  I Created a Destination

Everyone's walked a trade show floor, especially some of these small shows. You see a 6-foot table, pop-up banner and maybe a TV, aisle after aisle, right? So we have the luxury of having virtual reality technology, why not use it and not just show it, but let people drive it. What we did is we let people actually log into the our software on a big screen and move shelves around in a Walgreens or put signage on there, change the color of a signage, do all that stuff.

People started coming to the booth, and it worked. And then, as the technology advanced, we actually put people in VR headsets in our booth. So as you can imagine lines were... Even at these small shows, people are waiting, people who haven't been able to do VR headsets, so getting to do it there was cool, as a side plug, if anybody wants to check out VR, we really play with it all day so, we're right around the corner, stop on by.

4.  I Created a Custom Form and Landing Page and Integrated It with Our CRM

So, the booth is busy, we're getting people there, but we needed to make sure it wasn't gonna be more of the same, right? We didn't want to go, a week after the show, and wonder, "Hey, what happened?" "Well, the booth was busy, we had some good conversations, not really sure what's going on."

So what we did is we created a custom form and landing page that could be displayed on an iPad, we used HubSpot for our... Actually, Hubspot manages our website and is our marketing automation platform and Salesforce is our CRM. So this webpage was live in the booth on an iPad and people were able to fill out their email address. And how do we get them to do that? Well, it was a couple ways, we said, "Hey, if you fill this out we'll send you our collateral via email so you don't have it to lug it around with you. Oh, it's super green of us too, we're not printing as much collateral and, oh, by the way, you won't lose it as you travel."

You know, most importantly the leads are going in Salesforce and they're tied to the campaign and now they're being tracked and everything. This is all real-time, so our reps are able to get notified if our key accounts come to the booth and sign up, if they're not at the show they'll be able to follow up immediately, and they're also signed up for our newsletter.

So, think about this, before people even left our booth they got an email from us right away with their collateral, they're in a nurture flow to get an email two days after the show, and by the way, they're getting our marketing newsletter every month. That's three touch points without the sales team having done anything yet. Maybe a little conversation at the booth.

5.  I Went as Digital as I Could with Collateral

Another win here was I was able to print a whole lot less collateral. And anyone that prints collateral knows it's a huge waste. It changes the day before the show after you printed 600 of them to bring. So because it's a PDF hosted on our website now, I can change it the morning of the show. If you hear something great at that keynote, why not add it to the top of your collateral and then send that out to people so they remember it?

We know trade shows are busy. Everybody's talking to a lot of people, they're learning a lot of things. Having them in our marketing automation system allows them to be in these nurture flows, so if the sales team isn't able to get ahold of it, they can get dropped in another flow easily.

So here is what we learned. So after doing this for a while, we were able to learn kind of what our baseline is, and what we can expect at a trade show. And looking at previous trade shows where we had some data and future trade shows coming up we would be able to cut out these under-performing shows. And everyone loves that.

7.  I invested in the experience.

They think, "Okay, hey, we cut out a bunch of shows, that's cost savings, right?" Not so fast. I'm not giving that money up yet. I'm going to double down on my high-performing shows and really upgrade our presence, so the last two shows we did we were a premium sponsor, we had our booth right in the middle.

You had to walk by our booth twice a day to get in and out. We had a huge VR demo. This was 20x20 space which is pretty big for us at a trade show. People would walk by, they'd see people with the VR headset on, manipulating a shelf at Walgreens. It was cool. We were the talk of the show. We had lots of great follow-up.

So after these shows we were able to get 100 percent follow-up with all of our attendees, because anyone who came to the booth, they were signed up automatically and in Salesforce and in HubSpot and we’re able to track that through the entire pipeline process. And we also learned that trade show leads, especially, I said earlier our sales cycle is six to nine months, trade show leads take even longer. So it's okay. It's going to be really hard to judge your ROI for a trade show three weeks after it. It's just not going to happen, especially in a b2b space. And as a very tiny plus, since I wasn't printing as much, my shipping costs and printing costs went down, which increased my ROI automatically too, as well.