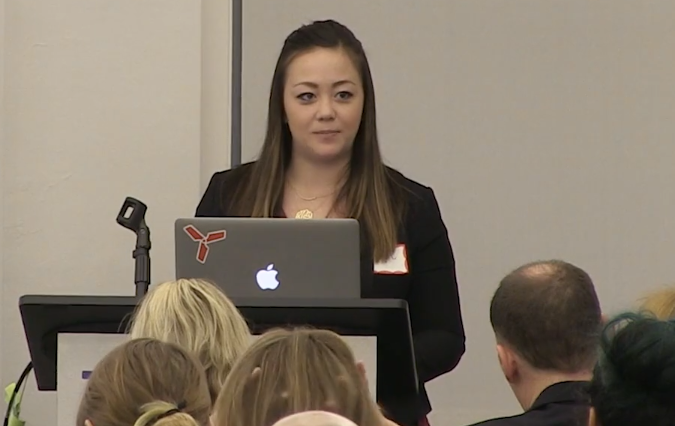 How to Turn Data Into PR Gold

Read on for a transcript of her presentation from our January 27, 2017 Here’s How Startup Marketing Conference where she describes how she used data storytelling to craft a compelling PR opportunity for GrubHub.

My name is Kaitlyn Carl, I am from the consumer PR team over at GrubHub. I've been there for about two years. Ever since I came on, data storytelling has been such a big part of our program, and over the past year we've seen it grow even further. One of the things I wanted to talk about today was one of the programs that our marketing department is probably the most proud of which is our "Year in Delivery.”

Leading up to the end of 2016, we were looking for a way to insert GrubHub into the year-end media cycle. There are always a lot of brands that are taking their data and reflecting on how 2016 went for them, for us we know that what we do well is food and delivery. So we were looking for a way to make this unique to the GrubHub brand and really just tell our story through our year in delivery. We process more than 270,000 orders per day, so we do have this wealth of data that we can reflect back on our users. It allowed us to marry, honestly, food trends with every moment in time throughout the year.

For example, when we saw the Chicago Cubs, thank God, win the World Series, we saw that hot dogs in Chicago actually spiked 36 percent. And on the day that the Powerball hit $1 billion, we saw that someone placed an order for a $75 porterhouse steak to be delivered to their house. Taking all these insights, we knew there was a great story to tell here and there was an opportunity to do it in a really interactive way. From there, we created this really great interactive page where we were able to use this as a great pitching asset when going out to media.

1.  We collaborated with our brand and creative teams

We worked hand-in-hand with our brand and creative teams to bring this to life. It was a very creative asset that we had and also really honed in on the GrubHub voice. 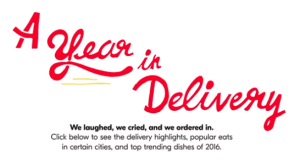 You'll see that we have our 2016 order history where the Powerball pops up, and then you have The State of the Union, winter storm Jonas and it kind of scrolled through just all these big cultural moments from throughout the year and how food related to them. Whether we saw tipping percentages spike or what special instruction that people put in their order that day or if there was just a spike in a certain food that day. 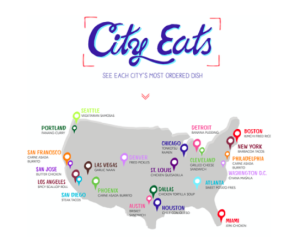 Another section of this site was our city eats map. This is kind of what I was referencing to before, how we saw Chicago had a really unique order trends and, in this case, we saw Tonkotsu Ramen was the most popular dish in 2016 in Chicago and I really think we have Ramen-san to thank for that and also, of course, all our other favorite mom and pop restaurants. We saw, over in Portland, Panang curry was one of the favorites. We saw in Boston, Kimchi Rice was one of the the favorite dishes. And because we segmented city-by-city, this allowed our coverage to not just reach a national audience but also go local. So we did a heavy push on local online media as well as broadcast and we were able to speak to each of these unique trends for the city, as well as turn back to our larger national trends.

This is also one of the sections of the site, which were 2016 delivery trends. Out of all the sections on this site, I would say this is probably the one that was most attention-grabbing for media. I think it was a really digestible piece of content that they were able to really spit back out to their viewers. It goes through the five most popular dishes in 2016. It was really easy to be able to speak to, you know, the Mac and Cheese, Tonkotsu Ramen again is such a big favorite of 2016 and I think the one that really gave the interest in media was knowing that Oxtail, which was kind of a random dish, really spiked in 2016.

This is also one of the sections of the site, which were 2016 delivery trends. Out of all the sections on this site, I would say this is probably the one that was most attention-grabbing for media. I think it was a really digestible piece of content that they were able to really spit back out to their viewers. It goes through the five most popular dishes in 2016. It was really easy to be able to speak to, you know, the Mac and Cheese, Tonkotsu Ramen again is such a big favorite of 2016 and I think the one that really gave the interest in media was knowing that Oxtail, which was kind of a random dish, really spiked in 2016. 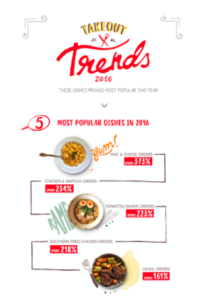 So it was those ones that you'd almost expect, but wasn't sure if they had really hit popularity in delivery yet. But seeing that Oxtail was on there kind of gave media a unique spin on that. In terms of media coverage, we were very proud to see that it hit very wide nationally. As you would expect, it did well in the food outlets but I think what was most surprising to us was that we saw this hit such a stride in our woman's lifestyle outlets such as Cosmopolitan and Refinery 29. We were excited to see that our messaging definitely came through. So we wanted to brand this as a year in delivery. This wasn't a year in food trends. It was a year in like Grub Hubs delivery. And that was very prevalent among all the headlines.

2.  We analyzed 2016 food order data and segmented it as much as possible

We were able to analyze the 2016 food data throughout the entire year. We then segmented it as much as possible: city-by-city and by cultural moment. The cultural moments were the ones that I was just referring to earlier, such as when the Powerball hit $1 billion or when winter storm Jonas hit, we saw soup orders in New York just go through the roof. Because we're in more than 1,100 cities across the US, we could pull data on what Chicago was ordering, also looking at what the most popular food in 2016 from Seattle was.

3.  We pushed highlights and pitched to the media

From there, we were able to use that as well as the highlights from that site and pitch that to media. So we were honing in on these cultural moments and also 2016 order trends and pushing that out to media, specifically.

When we first started, we thought that we had to get an exclusive. That's what was going to break the news here. But it turns out when you don't have the site ready to go and you don't have these visuals to show media, they're just kind of confused as to what you're telling them to do. So, it turns out, once we launched the site, we decided to go full force with the press release. And from there, we just started pitching with the press release and with the site fully launched. That turned out to be the most rewarding for us and resulted in these large pieces coming within two to three days of site launch. From there, we continued to pitch these national story lines in addition to our local story lines as well for a couple weeks and saw coverage.

4.  We drove traffic back to our Year in Delivery site through GrubHub channels and media coverage

Lastly, we were able to drive traffic back to this year in delivery site through GrubHub channels and through media coverage. I'd definitely say the goal of this campaign was to own our brand voice and really drive awareness through this. So this was more of a site designed to engage our diners. We were able to push this out on all of our channels; from social media to email. And I think it was really just to drive awareness, knowing that GrubHub can be there for you in any moment of your life.

I believe we launched on December 17th and saw this coverage roll in through the end of the year. And yeah. And that is how we turned our year in delivery into PR gold.