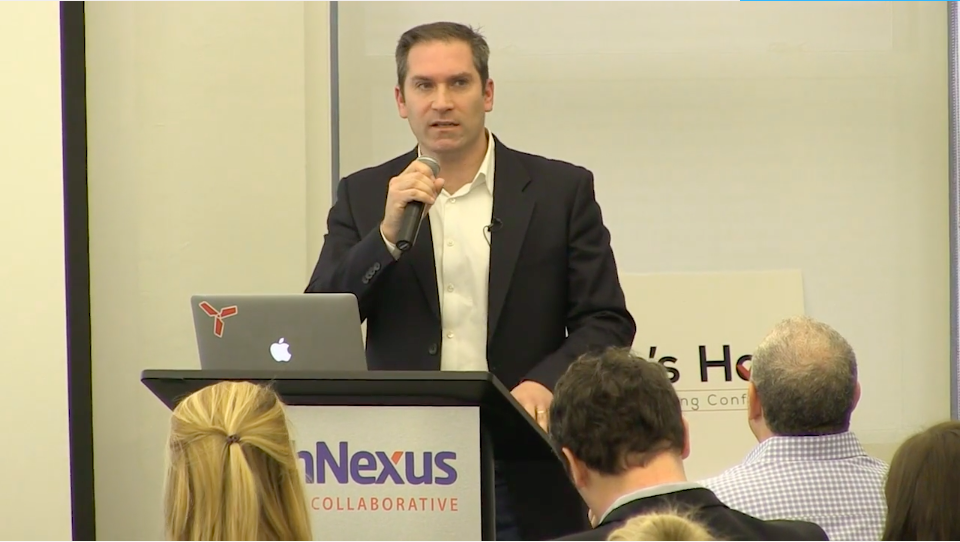 How We Made a Price Change a Multi-Channel Product Launch

Read on for a transcript of his presentation from our January 16, 2018 Here’s How Startup Marketing Conference, where he describes how he made a pricing change a multi-channel product launch.

Hi, I’m Matt Witt from M1 Finance. I'm here today to talk to you about how we took what could have been a very ordinary, rote announcement about our pricing model and turned it into a multi-channel product launch. We turned it into what we ended up calling, at M1 Finance, our Launch 2.0. It was a chance for us to really break through and create a new growth trajectory for the company. So we'll talk a little bit about the situation and results, but first a little bit about M1 Finance itself.

So if I'm doing my job at all adequately, hopefully a few of you have heard about M1. For those of you who aren't familiar with M1, we’re an automated investment platform. We’re essentially a brokerage service, although there are other financial products that we'll be unveiling over the next 12 months or so. But with M1, we combine the customization and control of being able to select your own custom personalized portfolio. You can select from any securities available on the NASDAQ and the New York Stock Exchange, as well as on dozens of different pre-curated portfolio templates that an expert of ours has designed. We also allow you to automate all of your investments. So if you deposit money, withdraw money or decide to edit things within your portfolio, everything is automatically rebalanced. You don't have to go through the process and the rigor of manually rebalancing everything. It provides a lot of power and convenience, so if anyone is looking to up their investments with a new tool, I highly recommend it. I'd give you a promo code, but we decided to go free, which is actually the crux of what we're talking about here.

So going back in time a little bit, we're going to throw back to the beginning of November last fall. We'd been a publicly available product for just a little over a year. We had launched quietly, admittedly, in September of 2016. I say quietly because at that point there was no marketing team, I hadn't even joined the company yet. We had a couple of different PR opportunities that we were able to get, thanks to Propllr, who had recently partnered with M1, but that was about all we did for the launch. So I came on board and began to recruit a marketing team. We started to optimize our message, our different channel activations and slowly eat away at the frictions that were available in the conversion process.

We got to a point by November where we were acquiring customers at well below the industry rate. We had a scalable company at that point, but for M1 to really be successful, we needed breakout growth. We needed to be massive and hit a new kind of growth trajectory. So parallel to this, we were having conversations with our CEO and he had a theory of the future of finance and believed it would be optimal for us to go free.

He said, "Savings accounts and checking accounts are free, your credit card is free as long as you pay it every month. Investment accounts should be free as well." Obviously, Robinhood and a couple of other brokerage accounts have done this before. Robinhood's the one that has really been able to capture lightning in a bottle and seize upon the notoriety of this model. But we looked at this and realized it was not only something we wanted to do for our customers, but it was also a way for us to accelerate our growth.

What I want to focus on is the realization we came to, which was that going free wasn't just going to be good for our customers and present us with a new model and opportunity, but it was the chance to relaunch the product. Now that we could take everything we had learned in just a little over a year of being publicly available, it was a chance to put that to work in a new launch, what we've ended up calling our Launch 2.0. This was at the beginning of November, and with the financial New Year's resolutions that a lot of people make, we know financial services has a seasonality to it. So we had to make this launch before Christmas because we didn't want to get lost in the clutter and the noise of the holiday season.

We had about five weeks to orchestrate this launch and make a bunch of different product changes and content. Here’s how we did it.

1.  We answered the questions: Why this change? Why is it important? Who cares?

First and foremost, we got our narrative straight. We knew that there would be a number of questions. Number one is, "How do you make money?" I'm sure people asked this of Robinhood when they made their announcement because people don't trust a company that seems to be offering something too good to be true.

For us, the truth is that we make money through backend services. Every single brokerage in America does this and that revenue was actually greater than we initially thought when we first launched the company. So we were able to provide very sound financial reasons for why we're able to go free and build revenue off of other services without charging our customers. We wanted to make sure that this really came through in a very formidable or emotional way. So our CEO set out to write what we called “our anthem,” and it was basically a blog post that we used as the basis for all of our content activation.

2.  We mined press relationships we built to begin telling story: “The Future of Finance Is Free.”

Once we had that, we worked with Josh and his team on a number of different press relationships we’ve built over the course of the year. We wanted to get this story out and bounce it off of different reporters whom our CEO has spoken with in the past from places like Barron's, Business Insider, Fast Company, etc. And the response that he was able to get helped us make sure that we formed that story... not that we created spin. Everything that we put forth in the story was absolute truth but we had to know the right way to tell it so that it created excitement around the brand name and sparked conversation. And fortunately, we were able to do that.

3.  We focused messaging for all brand touchpoints.

Then we knew we had to focus this messaging into something that's neat, tidy and crystallized, then activate that across all of our brand touch points. Once we figured out how we were going to activate, we would create a lot of content.

In the audience right now is our art director, Catalina, our one-person agency over the course of this. She created pre-roll videos for YouTube, Snapchat ads, Facebook ads and Google display network ads. We brought aboard a copywriter in the midst of this and she wrote new search ads for us and helped refine the different blogs that we were doing. We ramped up our content marketing efforts before our big anthem blog so that we could generate more traction and audience to it.

5.  We built out a play-by-play plan for activating content.

There was a ton of work that went into creating the content necessary for this launch. In fact, we made sure that everything was very neatly organized and run through with military precision. So this is just a snap, a screenshot, of our matrix that we developed. 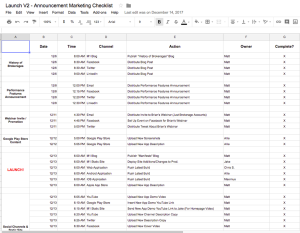 It was a grid that organized everything that had to happen and when it had to happen, leading up to the actual launch day itself, which you can see here [in red]. So by the minute, everything was accounted for in terms of when we were launching a particular content and activating different things. We rebuilt our website during this time period and because it was free messaging offered on the new site, we had to launch it in conjunction with some PR opportunities that we were able to seize upon.

We were able to start generating a lot of interest from the financial services community. We made sure to write the press release in a way that paid homage to Robinhood because we felt like that was going to be the media’s number one reaction: "Oh, Robinhood has already done this. So are you just following suit?" We took the elephant out of the room in terms of that conversation. After all, talking about Robinhood in our press release with reporters that would actually put us in the same conversation as a company that's worth $1.3 billion is not a bad thing.

We were able to generate a lot of good conversation with reporters and ultimately got a lot of PR traction with companies like Business Insider, who just wrote about us again yesterday. Plus, we had some reactions from a few of our rivals, which coincidentally did not include Robinhood. We granted Bloomberg an exclusive, so they were the first to get the news out for us on the morning of December 13th, which was our launch day. Following that, we worked with a number of other news publications to keep the word going. 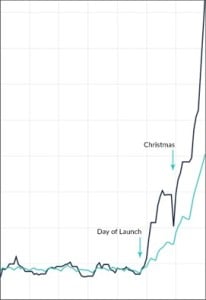 It’s actually been a week since I pulled this into Google Data Studio, so we've actually been continuing that upward trajectory. On average, we look at the seven-day rolling average of overall user signups. We've experienced about a 10x increase in terms of where our seven-day rolling average was before we made this announcement. In our daily AUM accounts, assets under management, is following that same trajectory. We had multiple days where we flirted with the million-dollar mark, in terms of the amount of new deposits put on the platform. We expect to get about $100 million total of total AUM very shortly.

You can see our growth trajectory changed substantially the day of the launch. There’s a little downturn at Christmastime, which is okay. We can expect people to spend time with their families. It was just amazing to me that we received about three to four times the amount of user sites on Christmas morning that we received on a normal day before the launch. That is essentially what we did in terms of taking a price announcement and turning it into just something that had a lot more energy and ability to sustain our growth. Hopefully we can keep this trajectory and momentum going.