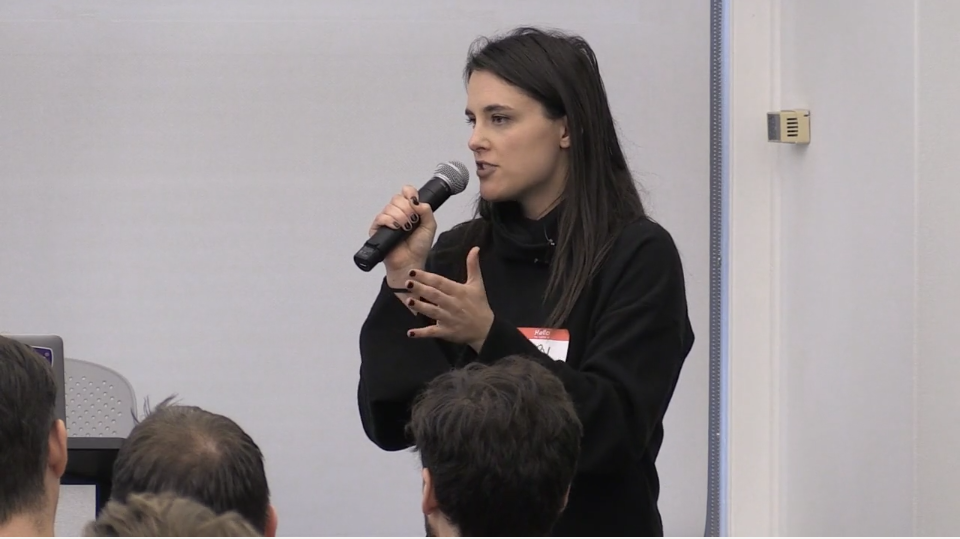 How We Repurposed Content to Empower Our Sales Team

Mary Rechtoris is a marketer who specializes in customer advocacy at Relativity, a Chicago-based startup that offers e-discovery software and solutions.

Read on for a transcript of her presentation from our November 15, 2018 Here’s How Startup Marketing Conference, where she describes how she repurposed content to create collateral for the sales team.

Hello, everyone, how are we doing? So, a little bit about me. Before joining Relativity, I was a healthcare reporter. I know there's a lot of healthcare folks in the crowd. Does anyone know Becker's Healthcare? I was working there, so I moved to the e-discovery field.

And I want to get a pulse on the room: how many people know what e-discovery is? Okay, besides my two colleagues, there's three or four of you out there. My dad, who's an attorney who does a lot of litigation, described it to me in the following way, it made sense to me at the time, so I'm hoping it resonates with you.

If there are two companies that are engaged in a lawsuit and they have to produce a lot of information like emails and all that, first, they have to gather all that. Then they have to assess what's in that document so they could proceed.

Are they going to move to litigation, which is great for my dad, or are they going to settle, which is more likely the case? What Relativity does is we equip our customers with the software that makes that happen. They can organize the information, know what's in it, and then decide on the best next action.

Some more fun stuff about Relativity: aside from the exciting world of e-discovery, we're really dedicated to giving back. We have a Wired To Learn grant, where we give $250,000 worth of technology to a school with limited resources over a three-year span.

It's also a fun place to work. I can attest to that for sure. We've been on Chicago Tribune's Top Workplaces for nine consecutive years. And something else that our customers are doing with the platform, they're doing it to effect real change.

One of our customers used Relativity to uncover the truth behind the 2014 Flint water crisis and uncovered who knew more than they said, and all that fun stuff. So really doing some cool stuff.

We have 800 plus employees. We have offices in Chicago, London, and Krakow because we're continuing to expand.

The situation that we were dealing with when I came on board in December of 2017 is an issue I think a lot of writers and marketers face. No matter the industry, there seems to be too much content you want to do in the year, week, even day. You just don't have enough time or people to get that all done.

In a similar vein, it seems that when you do get content out there, you're really excited about it. When you're done, you breathe a sigh of relief and jump into the next project without effectively tracking the ROI.

Or maybe you do, but you don't really know if that moved the needle in meeting your organizational objectives.

What our team was trying to do moving into 2018 is do more with less. I think another way that more people have heard it is, “Work smarter, not harder.”

So, we took a step back and thought, "How are we going to accomplish this?" And we said, "Why do we want to reinvent the wheel? There's a lot of great content that we have, that we can do more with."

Or, when we're pursuing new ideas, thinking through what else we can do with that content instead of just moving from one idea to another. So, what did I do, being new, not only to e-discovery, but being a marketer? I was in healthcare writing about spine surgery, so I had a lot to learn.

1. I referred to our 2018 GTM strategy to driving SaaS adoption


So, what I did is I referred to our 2018 go-to-market strategy, and primarily, we were trying to move our customers and prospective customers to our SaaS platform, RelativityOne. And it's common not only in e-discovery, but every industry is moving to the cloud.

That's something you can't really refute. But something that we were trying to push is why you have to do it right now and not in three and five years when your other legacy system – you paid off that contract. We really wanted to push them there now.


So being in a content role, I was thinking about what I can do to further that objective. And what I came to is looking at our website, talking to some people. We had a ton of content on the benefits of the cloud, as well as the benefits of RelativityOne, its performance, and all that jazz.

But we didn't really walk people through how to engage leadership and people making the investment decisions – how to get buy-in from executive leadership.

So, if a lot of my subject matter experts were in the healthcare space, I had a great idea, but I didn't know who to talk to. I was doing a lot of internal research, talking to our people about who they knew, was this a viable idea, did they think it was worth the time.


And while I was doing that, my manager April, who's in the crowd, talked to our events team. They were working on a very similar idea for an upcoming conference we were doing in London that focused on common objections that people hear to RelativityOne.

Whether that's cost, they don't want to bring or they can't bring their custom offerings over to a SaaS platform. And refuting those, and walking them through why you can do that right now. It really married well with what I was doing.

I started sitting in on those meetings with the events team and leadership to walk through what we were going to do to combine our efforts and what best next steps entailed.

And what my role was, being a writer and being in the content side of things, was writing a blog post that previewed this upcoming session at London. I talked to the speakers of the session to get an overview of what they were doing. Getting into somewhat of the nitty-gritty, but leaving some of the mystery for people who went to London to go to this session.

It served a dual purpose. Not only were we promoting the session, but we were starting a conversation about how to engage in these conversations with your leadership about moving to the cloud.

After we did that, I talked to my friend and colleague, Melina, who's on the customer success team. She's served as a speaker on the panel because she's in the platform every day working with our customers to successfully transfer to a cloud platform.

She said it went over really well. Not only were there a lot of people there, there were a ton of questions. And I think pretty hard-hitting questions for a new product. It just showed that there is interest about this.

4. We worked with the conference speakers (and others) to put on a webinar recapping major takeaways


When that was over, we sat down – myself, Melina, and a few others on the marketing team. We thought about: "What more can we do with this? How can we arm sales and our customer success team with materials that they can bring into conversations with prospective clients?"

We turned that into a webinar that had the same exact title as our conference session: "Going Cloud, Five Obstacles to Transforming your Business."

We kept the two speakers that were on the session with Melina, but we also brought in someone new, who was from another client. He's very abundant in e-discoveryy and knew a lot about the cloud, so he could bring something new.

We're keeping it fresh while also recapping a few takeaways. We're also going to bring some new flavor to the table. That also generated big interest, not only from our external people, but a lot of our sales and CSM's came up to us and said, "Give us more of this content. This is going to really help us in conversations." That led us to start planning for 2019.

Just to go over the results and how we got from this blog post to where we're going moving forward: that blog post got 700 views to date. It's over a six or seven-month span which is pretty good for our website.

At the conference, we have had more than 500 attendees from around the globe. That's a notable metric, but what's really important is the international market is something we're really trying to hit.

A lot of our customers are in the US so we're engaging with them. But we want to talk about how you can globalize your business with RelativityOne and expand your footprint. So we started to have the conversations with people we might not otherwise be able to in other avenues.

The webinar itself generated 70 sales leads out of 330 registrants. I believe when I last looked, there were 94 people that tuned into the webinar, because people are busy and life gets in the way. You might go and watch it after.

But something that I think is equally, if not more important: sales used the webinar to re-engage with people that are already in the sales funnel. So people watched the webinar, and then they could have more targeted discussions about what moving to the cloud actually meant.

We have one active opportunity with a big law firm that tuned into the webinar. I talked to executive leadership after to give them some of the results because this was a big interest. We hadn't done something like this before and there was a prospective client who ...

What we're competing with RelativityOne is a lot of clients want to set up their own cloud infrastructure. They think, "Why can't we just do it ourselves? We have people well-versed in the tech, well-versed in setting it up?" But it costs a lot more and it's a lot bigger of an endeavor than people think.

This client was on the fence on what they wanted to do, but after hearing from this speaker talk about their law firm trying to set it up and ultimately not having success, they decided to move with RelativityOne. So, leading to a sale, hopefully.

And in 2019, what our focus is with building on this topic, is more towards sales enablement. We also want to drive sales and do all that. We also want to help people that are actually in the software with the more day in, day out.

Whether that's migrating 10 gigabytes from your existing platform to the cloud, what does this mean for customizing, and all that jazz? Just going more in the leads to not only help our sales team in future conversations but reduce the number of conversations with our sales and customer success teams have day in, day out. So that's what we're doing in 2019.

And if I could leave you all with anything, I would just please encourage you to think about how you can repurpose your content, whether it's an ebook, a video, a testimonial. The possibilities are really endless, and it will really help you move your objectives, whatever you're trying to achieve.