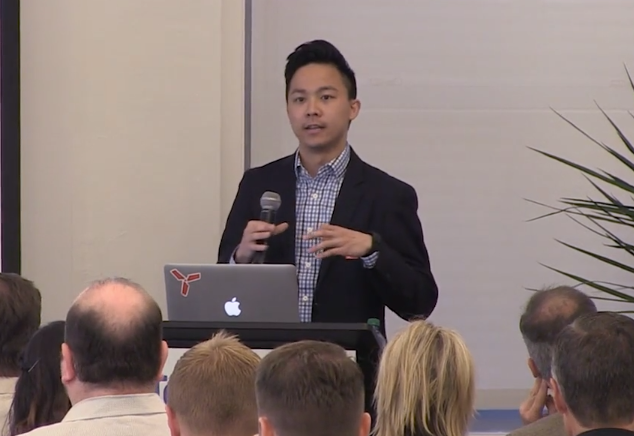 How We Took Content Marketing from Good to Great

Will Yang is the Co-Founder of Albert.io, a Chicago based computational exam prep platform.

Read on for a transcript of his presentation from our January 27, 2017, Here’s How Startup Marketing Conference, where he describes how he and his team took content marketing from good to great.

My name's Will Yang and I'm the CRO of Albert.io. We provide interactive learning materials for tackling difficult academic subjects, so think back to your high school days: APs, SATs, ACTs, Common Core, all that jazz. In terms of how we do marketing, a lot of it is focused around inbound marketing – that was our strategy for the past two to three years. That has scaled over time, so what I'm going to go over today is how we went from good to great when it came to content marketing.

I was a 21-year-old college student starting a start-up and I had no idea how to get leads. So, in the summer of 2014 we started a content marketing external team of around 30 freelancers to essentially create 500- to 1,000-word articles for our blog. When we went through this process from around June through July of 2014, we found that there were mixed results. We would get some keywords in terms of our rankings but the content itself was not really high grade. There were fluctuations in terms of quality, as well as just the rigor of what the standard was in education for the sort of content that people expected us to deliver. We had really limited bandwidth at that time: It was just me, my co-founder and our first employee. And so, what we had to come up with was a systemized way for us to drive new traffic to our site and build a viable channel for inbound leads.

1.  We deconstructed the success and failures of our first iteration of content marketing

So when we published around 100 articles, what we found was that there was definitely a repeatable process when it came to drafting, much like in college essays when you're writing through different versions of your thesis. But what we had to figure out was, how do you hire really quickly? Get those writers onboarded to start speaking in the tone of your company, and then from there, start delivering those works onto your CMS or whatever you're using in terms of launching your blog.

2.  We created a replicable process for content creation that catered to our content writers and set clear SOPs

What we found was that one of the biggest success points was just our onboarding process for writers. What we first did was break it down into three to five steps in terms of what was the most effective part of getting ramped up to start writing about educational topics.

So one of the things was giving them background around the different subjects that they were teaching on, but another thing was just platforming, right? A lot of onboarding going around things like Trello, as well as Dropbox and all of the core platforms that we would use in terms of uploading drafts. And from there we had to set those out in clear SOPs in terms of what was super important vs what wasn’t as important, just prioritizing between those two tracks.

3.  We categorized what to delegate and what to keep in house for each step of the content creation process

Once we did that, we knew what we had to keep in house and what we kept out of house. What we did was we essentially had everything done in house for things like uploading the content, publishing it, scheduling it, doing social media pushes on it, etc. but everything else with respect to writing was actually done outside of house with freelancers. And so we had to come up with checks and balances to make sure quality control stayed at a really high level.

The way we did that was we brought in a team of writers but then we also had editors, and from there we essentially scaled this out to a situation in which we had a team of one person, me, doing this, to having 50 remote people fully working on this project and understanding how many articles we needed to release every single week in order to deliver on especially important content pieces.

I don't know if you guys are familiar with the blog Quicksprout. What Quicksprout goes over, in one of their core strategies, is the Skyscraper Technique. Essentially, what we did was isolate what our competitors were ranking for at the moment, because that's where traffic already existed. Then, we created more evergreen content that was sharper or more refined in terms of the depth we went into that respective topic.

So every single content piece that we were releasing on a daily basis was at least 1,500 words with many of them ranging from 3,000 to 5,000 words. We were slowly generating the snowball effect in which every single week we were releasing five to 10 posts every single day on our blog to the point where we started getting traction there with actual, important, relevant traffic that drove us toward getting leads and opportunities from this marketing effort.

4.  We understood what velocity we needed to release content at in order to achieve traction

One of the biggest things we understood was that though this sort of approach to content marketing is high velocity, it also has an element of churn to it that you have to consider when you're outlining this sort of process. So, for example, in one week we might hire 20 writers, but I'm going to assume that of those 20 writers, five of them are not going to make it through onboarding, which leaves me with 15 writers. And from there, how many of those 15 writers are going to be able to produce at two, three, five articles a week, etc.

5.  We hired and fired fast

We were figuring out how many articles we were actually generating and then growing it toward releasing those articles at a really steady pace. So that entire process of ramping up the overall system took anywhere from two to three weeks every single time we were creating, or re-hiring a new string of writers.

6.  We regularly reflected and adjusted process to what we saw on the front lines

Then, one of the biggest things that obviously is super important is just making sure that we regularly reflected when it came to adjusting the process of what we saw on the front lines and adapting that toward the next iteration of our respective blog system.

In this time period we saw a 600% increase in pageviews from our blog. We generated hundreds of inbound leads which is traditionally really difficult in education. In our case, we had to find long-tail keywords that were things like “AP US history review tips,” just very micro terms that only a teacher would look at because they are some of our core customers.

Figuring out exactly what that buyer's intent was in terms of the sorts of key questions they would be looking up in Google was essential. From there, what we also found was that we ranked above the fold and beat our competition for a lot of those original long-tail keywords that we looked at from using products like SEMrush. We also refined the process so that at the time in which we used the strategy, we would be able to handle 50-plus freelancers with a full-time team of only three in house. A lot of this was just clearly replicating that process and scaling it to a level where it was easily maintaining the same quality as well as preserving the sort of brand and the sort of recognition that we wanted to have in this respective space. So, by the time this stint ended, we had published over a 1,000 pieces of content, all of them were at least 1,500 words in content.

What you see on this graph is actually our SEMrush data before we did a rebrand, so before we were Albert, we are called Learnerator. And what you'll notice here is that if you look at the midpoint of 2014, that's when we start the digital marketing effort. By the end of that summer we’re not really seeing that much of an uptick, so that's what I mean when I say our first iteration of this process just frankly wasn't delivering on the results we wanted.

But what we started doing throughout that secondary phase of 2014, from July through December of 2014, was start really ramping up this process and refining it. And you can see the uptick starts around the time that we turn the corner into 2015, going up to the point of around 2016. This was our peak and this is also when we began to do a rebrand. So what we did was redirect all of our traffic from learnerator.com to albert.io. But you can see during that year or so of content marketing, we essentially scaled. We saw significant growth. This was also what gave us enough growth to raise our next round of funding. We're now a team of 40 and we're scaling everything across the board, and that's pretty much how we took content marketing from good to great in the span of about one to two years.