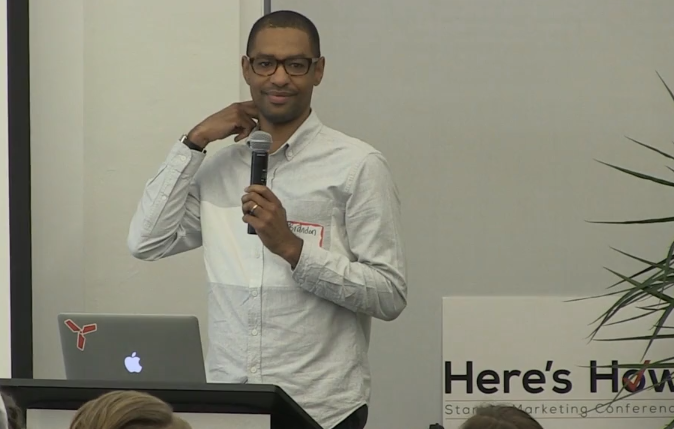 How We Used LinkedIn to Get Prospects to Call Us

Brandon Dudley is the Marketing and Operations leader at BusBank, a Chicago-based charter bus transportation startup.

Read on for a transcript of his presentation from our September 19, 2017, Here’s How Startup Marketing Conference, where he described how he used LinkedIn to get prospects knocking at his door.

So I know most people today use Facebook for ads, or at least I'm assuming so. How many hands? Yeah, quite a few. Our company is called BusBank. We do group and event transportation. We're a kind of marketplace, so we work with bus companies and limo providers throughout the United States and Canada. We can handle something as simple as a wedding or as large as Coachella. We run all the shuttles from hotels to the events and we do some evacuation work as well, working on four of the recent major hurricanes.

And we’ve also managed daily transportation for each of the presidential candidates. So every day, when the candidate traveled, they had, depending on the candidate, up to 200 reporters following them at all times. Every day those reporters fly in they need a bus to take them to and from all the events all day, and then they take them back. In one day they might visit four or five cities, so that means every day they have to have transportation for all of these cities. And it’s complicated for a lot of these campaigns because if you're a staffer, you probably never chartered a bus and probably call Ubers all the time, but if you have 50 people, it doesn't work. And if you have 200, it definitely doesn't work.

So this is an area we know every four years is really good business for us because they travel every day for a year or so. We've worked with both sides of the fence, so we're not picky on who we work with. We might have some interesting conversations about it in the office, but there you go. We started this about 10 years ago and we really wanted to reach specific people at each of these campaigns. So before the Obama election the first time, we worked on that campaign with his people, as well as McCain.

There were three or four different campaigns during that time and what we found out is that there are certain people at each of the campaigns that generally get passed this obligation. And it's usually, as the campaign moves along, it pushes on to different people. But in the beginning, they give it to an intern who usually likes to post all online about their new job. So they make it quite easy to figure out that they're an intern for a campaign seeing as they constantly post it on LinkedIn to try to get jobs.

We discussed internally how could we find these people this past election. We knew who they were and that they had no clue what they were doing. So we were like, "All right, let's figure this out."

1.  We gathered quantitative and qualitative data from past work with campaigns

So we took some of the data from the past and we looked at all the different titles that people had at the beginning of the campaign vs at the end of the campaign, and during that time, we decided which channels would work. We decided we would try Facebook, but it became difficult to figure out who actually worked for the campaign and who was just posting that they were making America great again.

2.  We looked at how and where our audience was most engaged online

Eventually, we decided LinkedIn might work best because they'll post that it's their job and they'll usually join some groups associated. If they work for a campaign one year, they usually come back in four years or they go work for minor campaigns in between. So if we know that we're looking to target a Democratic candidate, we'll find all of the people that would have worked for past candidates and check LinkedIn groups that they are in because they form groups like the Obama Alumni 2008, etc.

We find them and then put them all in a group in LinkedIn. If you already know the names and contacts, LinkedIn now has an import feature so you can import and customer match your audience just like Facebook, which makes that really easy. So if you know the people, you can then create your different ads based on what you want them to see. And if you don't know who they are, you can then target them by what groups they're in as well as job titles, which makes it really easy. That's really where we started.

3.  We created an ad structure

We didn't know who all these people were. So we picked out the groups they were in and went from there. If they were a more senior employee, we'd show them a different ad like, “You've done this in the past. You know it's a pain,” and hit some features and benefits for them. If it's a new person, it was more of a lighter message like “Help your job be easier, this is how you can do it," and we would run those ads.

4.  We drove traffic to a specific landing page that had a real person’s name and phone number

We created about 40 different ads in a few different campaigns. Each of those had a landing page associated with the corresponding campaign so we'd know who you were. We'd take that information and be able to show who your name was based on when you visited the landing page. We had a phone number of a real person on the other line because we knew if they wanted to talk to someone we needed to make sure they went to the right sales rep in our office who had already worked on campaigns two or three times before and knew the answers to their questions. This was important because if you turn these people off, they're not going to talk to you again and you'll lose it all out.

After running the campaign for about a month, we finally got two phone calls. One of them was a just a random person in California who wanted to make their own campaign and  run for president. They had this big idea that they were going to run for president and made YouTube videos to campaign… so that was a fail.

But the next call that came through was actually somebody from the Hillary Clinton campaign in her Brooklyn office. It was an intern, and they said, "I've been placed with this job. I don't really know what I'm doing." Tony, the sales rep, was super excited. He screams, "I got a good call!" And we're like, "What? What are you talking about?" So we all huddled up and he let us know that it was from the campaign and began the discussion with them.

We've also used this process for a few other things like landing employee shuttles, which is our big business force. We now run several shuttles every day in the Bay Area, so if you work at Facebook or Google in San Francisco, you have to get down to Mountain View. So we do a similar strategy for those places. Mainly, we'd use the same ad group targeting. You'd use HR directors in this case, some of these companies even have whole transportation directors, and you can cycle through the ads.

We've had pretty good success at getting the CPMs lower. I know that the costs are typically higher than if you run a Facebook ad or whatnot, so it works for products that cost more money but I wouldn't try it if you're selling fidget spinners. If you really are trying to sell to a B2B customer or anybody that has a high lifetime value, you can have really good success with it. We now use it as part of our strategy, and we're going to continue to expand on it and try it in different ways.