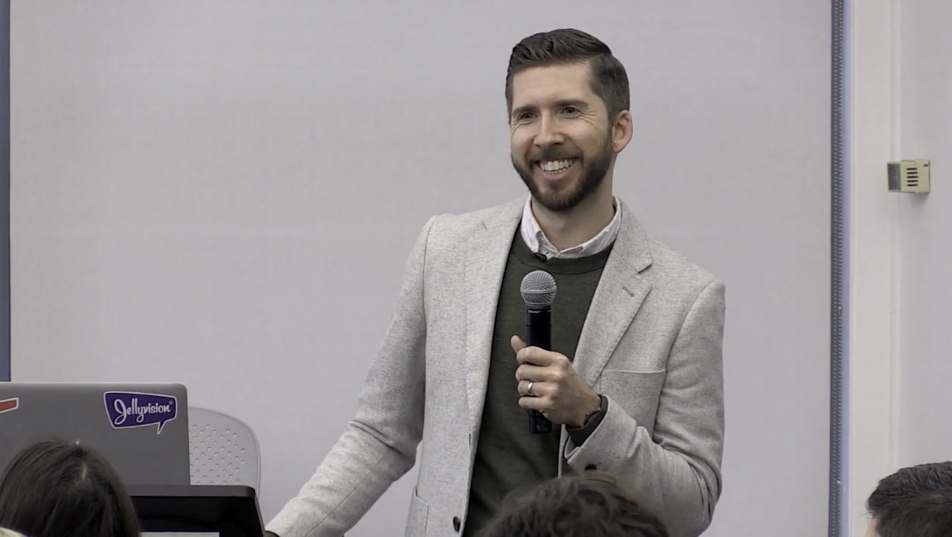 How I Got More From Every Email We Send

Read on for a transcript of his presentation from our November 15, 2018, Here’s How Startup Marketing Conference, where he describes how he used his own company’s marketing automation software to maximize the impact of every email they sent.

Thank you for the pitch. So I didn't even have to do it. I didn't want to make it a sales pitch. I hate when these are pitches. But it was a great segue because we just had Josh talking about marketing automation, that's literally what we do. We're a marketing automation platform designed specifically for the SMB and mid-market space.

So the way that I described it earlier in conversation with somebody else if you have that spectrum of tools and you have your MailChimps and Constant Contact and more basic email marketing on one end and then you have your HubSpots and your Marketos, the all-in-one solutions, annual contracts on the other end, where we were talking about it, somebody throughout the number that people use five to ten percent of what those tools can do. We're right in the middle of that spectrum.

So, I'm recently starting at ActiveCampaign I started in June, coming from Sprout Social, where I was for six years. So I'm specifically on the product marketing team focused primarily on onboarding product adoption, and ultimately driving people toward conversion. But I had significant experience in email marketing. So that's the focus of the presentation today.

ActiveCampaign I mentioned is focused on helping growing businesses connect with and engage their customers so we work with a ton of SMBs, that are new to marketing automation. This is typically their first foray into it.

Some of the things to note, we recently surpassed 60,000 customers, and 50 million in revenue and we're spread across the entire world. We don't really have any one customer accounting for too much of our business and not, a small subset of our business is based in the United States, so we're a fairly widespread.

We have been bootstrapped from 2003 to 2016 and raised 20 million in 2016 almost more so just for the visibility because we've been profitable since the start, which is really, really interesting in this space. And then I mentioned I have the experience, not only in email marketing, but user onboarding and customer life cycle.

So when I arrived at ActiveCampaign in June, what I noticed was that we were preaching these two big things with what you can do with our tool and it's segmentation, making sure that you're sending the right person, the right message, at the right time. And also email being the easiest channel to prove ROI.

We weren't really doing either of those. So that was what I noticed when we came in, because any given product launch that we had or any given email that was going out, we were sending stuff just to send it, just to stay in front of people.

We wanted to send something out every week to our entire database. You're talking about 500,000 people that we had in our database and we're not really worried about whether or not we're proving value with that stuff.

And when we're sending a product launch, it's typically just, "Here's what we did, go read about it." When you get to the blog, there's no other action for you to take. And the way that our system was built we're a trial-based software.

You come and you try us for two weeks. When you land on that page, if you were a cancelled customer or someone who had already tried us like a year ago or something like that, try it free buttons are plastered everywhere on the page. So you can just go back and start another trial and keep using us for free.

So for me, as somebody who's focused on conversion and driving revenue, that drove me insane. It was like, how are we doing this? And when you're just sending the same message to everybody just telling them to read, we're not taking into account who they are what they're interested in.

You're going to see your open rates and your click rates and all that stuff just tank over time because you're sending stuff just to stay in front of them and just completely devaluing your message.

1.  I met with everyone who knew more than I did.


So, what I did was I started with meeting everybody at the company who knew more than I did, because I knew nothing. I needed to dig into our data, and I'm sure everybody in the room would agree. You have a data problem. We had a data problem too. Everybody does. You have things in disparate sources.


So I needed to understand who everybody was and what the main data points were that I needed to look at to establish what the stages were of the customer life cycle.

3.  I navigated the data to understand how we would identify these groups


So I just needed to understand what data we had available to us at my disposal. We used our own tool. Eat our own dog food. So I had to use that to say, "What are the rules that define who each of those groups are?"

4.  I used automations or rules to tag or mark people with their stage


And then I can use marketing automation. I use my own tool. You can use tons of other things. In the past, I've used Salesforce for this because you can just create rules to assign a new field to say what stage somebody's in at any given time.

I was able to build out an automation to say, I have one time catch-up campaign that's going to send this water, send people through this waterfall of logic to say, "Okay, do they match this criteria for this bucket?" If yes, assign that tag to say that they're a lead. If no, send them to the next step.

And we keep on going through to assign the stages for everybody. And then you have an automation per stage of the life cycle to catch changes. So, if I say at the most basic level, I want to see what their plan tier is. That tells me whether they're a trial user or a paid user.

So that's at the highest level how we were able to see that. And then what you do is you have, at the end of the day you have some general action that you want everybody to take. There's the little things that you're doing. You want to nurture people and send them content and get them to take specific actions.

But at the end of the day, I want leads to start a trial. Move to that next stage of the funnel. I want trials to just use the product and be in it. Same thing for customers. And for expired trials and canceled customers, I want them to pay us. I'm going to stop sending them to the blog that just telling them to try it free again, and I want to get that money.

5.  I updated all (yes, all) of our emails to dynamically account for these stages and promote the relevant action


Once I know what those general actions are that I want people to take, we're able to update literally all of our templates regardless of what the main action of the email is. And then completely change the way that we approach product launches.

When you're looking at email templates, I know in one of the previous presentations we saw some designs. Standard, you'll have your own logo in the top left. In the top right, you have what I would call a prompt CTA.

We'll dynamically always populate that with what that high level action is. So regardless of if I'm promoting a blog post, some piece of content that we want to use to provide value to you, or much more specific action, that's always there.

It's in your face. So log in now, reactivate your account, do a demo – you can get much more specific with it depending on what your groups are and what your stages are.

6.  I challenged the goals of our emails


And then for product launches, any time that we're releasing a new product we're able to sit down as a team and say, "Okay, what do we actually expect to gain out of this? How big is this launch? Is this a feature that is something that's going to drive specific action right away so we can dedicate this email solely to that product, or is it something that would go more in a roll up?"

If it's a roll-up, we'll send all this stuff just almost newsletter style and can point to the blog like they were doing before.

If it's a big enough release, we'll send a dedicated send where the main action of that email is that primary action. Secondarily, go to the blog and read more if you want, but if you're ready to take that action that we want you to take, then just go take that action.


So then when it came to seeing what the results of this were, I could have tested it. I'll be honest – I chose not to because this was a gut call that this was the right way to do it. I didn't really want to send another email to 500,000 people and risk the fact that we weren't really telling them to do what we needed them to do. So I just made the decision to change it over.

It was something that was never measured before, so now we had the ability to measure it and go back to the product team and go to the sales team to say what we actually got out of it.

So we just switched over to this as best practice. All of our templates were updated, but then when it came to product launches, we release a product, we're able to then just say, "We're going to standardize," and a week later go back and look at who got which version of that email.

If their tag changed to say that they have moved to the next stage of the life cycle, then you can look at revenue related to that.

So, the example there was that I was able to say our last product launch generated more than $260k in new revenue. And that's specifically looking at people who moved – whether it was trial or lead or canceled account or expired trial back to customer – and then what that total revenue number was.

8.  I pivoted strategy by gauging what resonated and what didn’t


So then we are just able to align much closer with the product team and say, What do we expect from these launches? And then, did we hit that mark? Which is something that we weren't really doing before we're launching stuff just to launch it.

Now we're able to say, "What do you think penetration for the specific product should be?" And then we can go confirm that afterwards. I feel like I might have run through that fairly quickly, but that's all. Any questions?