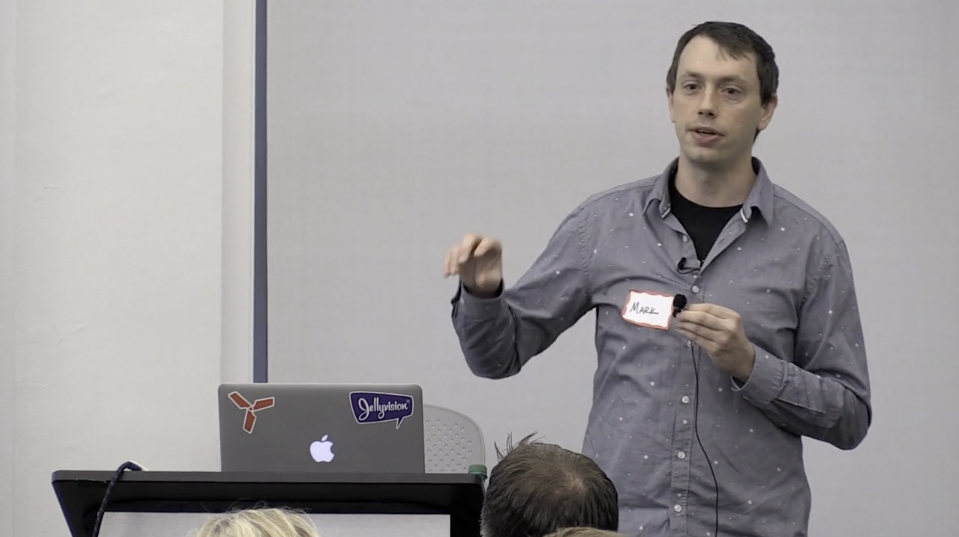 How I Perfected Our Brand Messaging

Mark Meadows is a Product Marketing Manager at TopstepTrader, a Chicago-based company that offers a kind of bootcamp for traders interested in futures and Forex.

Read on for a transcript of his presentation from our November 15, 2018 Here’s How Startup Marketing Conference, where he describes how he improved their run rate in nine months by perfecting their core message.

Thanks. What we're going to talk about today is how I got a new product to a million dollar run rate by perfecting our core message.

As Josh said, my background’s in communications and public relations. So this was kind of in my wheelhouse to figure out. What do our users and customers respond to? What gets them to purchase and travel through the sales funnel?

About TopstepTrader: what we do is evaluate futures and Forex traders, and then financially back them with our own capital. This year thus far we've funded 820 traders: giving them live capital to trade with, follow our rules, and then to profit in financial markets.

We were named Crain's Best Places to Work number 14 this year, and we're hiring aggressively. So if you are looking for a position, please check out our careers page. And then Inc. 5,000 for 2017 and 2018.

So the situation: for about seven years now we've been funding futures traders – traders of futures products. And in January this year we expanded that to the foreign exchange market, which is a global market – much more international.

We had to know who our target audience was. So, where do they live online? What can move them into action? What can cause them to purchase? What attracts them to us?

This is an interesting sort of market because a lot of the trading educators and people in trading technology, what they try and sell is this “get rich quick” thing, and we're not that.

We're very focused on the process, and on connecting with the traders and telling them, "Hey, this is a long-term scenario." So we didn't want to do anything that would kind of risk putting ourselves in that “get rich quick” scheme thing.

1. I started with what we knew


How we did this: we started with what we know. We have this seven-year track record of this successful product, and that's our base. But we don't know if the new market will respond the same way as the existing market. So we know what works, we know it works well, but we're not sure if there are better things out there that could work better.

2. I focused on the channel that worked best for our current product


We started and honed down on the channel that worked best for our current product. That just so happened to be Facebook.

3. I identified messages that may resonate and set up four tests


And then identified messages that may resonate. So from conversations with traders, we set up four messaging tests.

Those tests were kind of the value proposition of our business. So: “Become a funded trader; trade our capital.”

The second was “Learn how to trade.” Because we believe strongly that the best way to learn how to trade is to have experience in financial markets, to do it on a day-to-day basis. You'll never know the psychology that'll kind of impact your trading until you actually do it.

The third was kind of a reverse of the first, which is “Stop losing money.” Research tells us that 90% of traders are unsuccessful, that they lose an average of $13,000 doing this and learning.

It was kind of like a reverse of that first positive message, to see if it connected with people.

And then the fourth was actually telling them stories of traders that we have funded. So, “Hey, John earned our capital to trade. You can do that too."

4. I didn’t change anything


And then we analyzed the data from there. The way we did this is we had them at first all go to a singular landing page where they had the opportunity to put in their information and become a lead.

All four of those messaging tests directed to a singular landing page, and then we analyzed the data inside of Facebook. What we saw there was that all of the ads were sending people to the landing page in near exactly the same quantities.

We set up four distinct landing pages with different forms, and the landing pages themselves were exact clones of each other. But we said, "Hey, they're getting to this landing page in the same rates. What do they do once they get on that landing page?"

And that's where the gold was. That's where we saw that one of the – well, two of the tests. The first and fourth. So the “Become A Funded Trader,” “We Fund Traders,” and then the “Trade Like John Who Earned Our Capital” – they were performing at extremely better rates in terms of getting people to put in their lead information. So, from there we kept testing that.

6. I found one clear winner and went all in


And then found that clear winner and went all in. And then from there, it's kind of an interesting question of how do you use this to then scale to other marketing channels, right?

You know this one message is perfect for Facebook, but really when it comes down to it, that's all I could tell you, right? Like, "Will this work for banner ads? Will this work on forums?" All of those things we didn't really know and so we had to repeat that test in other channels. And we could kind of hone it down, so we knew the first and fourth were the best performing.

When we went to the banner ads and the forums we kept with those, and actually tried to shy away from the “Trade Like John” just because it felt awkward or uncomfortable for us to put our users like images and pictures on forums. It seems a little weird that someone – one of your traders – can go to a page and see themselves.

We, at first, shied away from that, and then the performance was not where we wanted and we shifted back to that. It actually increased results dramatically. Just kind of reinforced that this one core message is the core message that is resonating with the people who are trying to convert.

There was no sort of discount, no offer. And this compares to four percent in the two under-performing messages. And that's actually a higher landing page conversion to landing pages than we have that do offer discounts.

So, more people are putting in their information to learn more than they are to get a 20 to 30 percent discount on some of our other products. And then 3.5 percent of those leads ultimately converted to a purchase.

This has kind of helped us scale and fuel our growth to where we are now, at like a million-dollar run rate. Oh, that's it. I thought there was another slide. This has helped us scale as we continue to invest more and more money in the marketing tests that worked. Any questions?