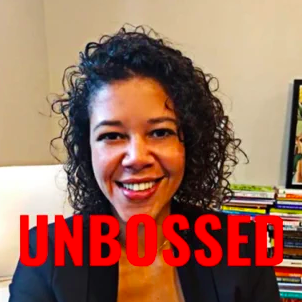 Want to Start a Podcast? 4 Insights from Unbossed’s Marina Malaguti

Eventually, she made a deal with HR: she wouldn’t talk to any more candidates until there were at least three women in the mix. After all, her team already had plenty of men.

The experience left her wondering why it was so hard to source women for a data science role. And that stirred another question: What was the gender breakdown at the executive level for tech roles in Chicago? More specifically, she wondered how many of Chicago’s Chief Technology Officers (CTOs) were women?

Out of the more than 700 Chicago-based CTOs Marina found on LinkedIn, only about 40 of them were clearly female-identifying. That’s less than six percent.

Based on this discovery, she decided to take action. Last year, she launched UNBOSSED, a podcast whose original mission was to interview all of Chicago’s female CTOs (since then, Marina has expanded its scope to include female executives in other fields as well).

We spoke with her about her experience hosting the podcast so far. Here, we highlight some of her insights about podcasting for any startup thinking of launching one.

“The first thing I want to do [with UNBOSSED] is make sure these women [in leadership roles] are recognized,” said Marina. She cited Jellyvision CEO Amanda Lannert, who has pointed out that, in order for more women to join a field, they have to be able to (literally) see themselves there.

Lannert has made this a reality at Jellyvision, whose C-suite is majority female. Across departments, the rest of the company follows suit.

To reach gender parity in leadership roles, according to Marina, it’s essential to do three things:

“Women often ask me what they can do to bring more women into tech,” said Marina. “I believe our contribution is to be women in tech so that others can see themselves in these roles.” She currently works as a data engineering manager at Instagram.

A focus on highlighting other people can be particularly effective in a podcast if those people aren’t otherwise getting the recognition they deserve. Marina, for example, noted that, the more she has researched for UNBOSSED, the more she has discovered “hidden” female talent in positions of power in Chicago.

“There are a lot of women doing really cool tentacle maneuvering, in charge of important things they don’t talk about,” she said. In addition to 40 female CTOs, for example, Chicago has only 26 women leading multi-million dollar foundations (out of hundreds) and only 15 alderwomen (out of 50).

“Part of my job is giving these women the space they deserve to be recognized for their outstanding work.”

Apply it: Focus on interviewing people in your niche whose work is invisible to people outside it or whose work usually goes unrecognized. This strategy helps ensure you’re telling stories that aren’t being told anywhere else. In addition to UNBOSSED, look to 99% Invisible for inspiration.

Several times in our interview, Marina emphasized that what she was doing wasn’t new or even “news.”

Her message, she said, doesn’t matter because it’s new – it’s not. It matters because her goal is to normalize women in leadership and to highlight their experiences.

The point is that a policy that forces all parents to take time off when a child arrives normalizes parental leave rather than having it act as a de facto negative for the employees most likely to take leave (i.e., women).

“The employee will take time off when a baby is born,” said Marina. “It creates a level playing field.”

With UNBOSSED, Marina aims to normalize women in top-level leadership positions – especially those like tech, where they’re severely underrepresented.

Apply it: Don’t worry about saying something brand-new with your podcast. Instead, identify a valuable contribution you can make to an existing conversation or trend and focus on doing that. (For more on this concept, check out Alexis Grant’s argument about why content programs shouldn’t try to cover news.)

3: Think Beyond the Podcast

Marina is serious about increasing the number of women in leadership roles, in tech and other industries. To that end, she’s not focusing only on UNBOSSED.

“I worked with 1871 (the #1 university-affiliated business incubator in the world) and the former ITA (Illinois Technology Association) to create a women’s accelerator program that would help women get ahead faster,” she said. “Help ‘build the bench.’”

She’s also working to reestablish the Chicago Woman’s Club, the original inception of which launched in 1876. While Marina acknowledges that the original club was not the most ethically run (and consisted of members who were mostly wealthy white women), it helped introduce several impactful projects in the city and in the nation.

Marina’s aim in relaunching the club is to reignite that mission of doing good in local communities through action. She cites research showing that, when women have leadership positions, their communities improve.

Apply it: Even if your goals for podcasting are more tied to marketing or sales performance than big issues like gender equality, it’s important to consider your podcast in the larger context of your marketing efforts. What else are your company and its leaders doing to meet your goals? What else could they be doing?

“If you lack the passion to push through the day-in, day-out, you might fail,” said Marina. “I, for instance, do it for fun. I love interviewing these women, to support one another and, our communities. We can have it all, achieve it all – yet, we don’t have to do it alone and run ourselves dry.”

To this end, she recommends following Tim Ferriss’s advice: Don’t do everything yourself. For example, she hired someone to coordinate interviews so she can focus on the parts that she enjoys – actually doing those interviews.

Apply it: Instead of focusing on monetizing your podcast through sponsorships or growing an audience of prospective customers, aim to use the podcast as a network-builder. Add value and create trust by telling the untold stories of people in your space who are or could be your clients.

Many people enjoy listening to podcasts because they can sound like freeform conversations between interesting people. But going in without a plan – to the undertaking as a whole or to individual interviews – can lead to underwhelming results.

To make sure that the time and energy you devote to running a podcast yields positive returns for your startup, start with a vision about what you want to say, who you want to spotlight, or how you want to contribute to an existing conversation.

And of course, follow through: your podcast probably won’t be featured on the Apple Podcasts app right away, but it can help you build brand affinity among existing and potential customers. With a vision, a goal, and the passion to sustain the long-term efforts, a podcast can become a valuable part of your startup’s existing marketing efforts.