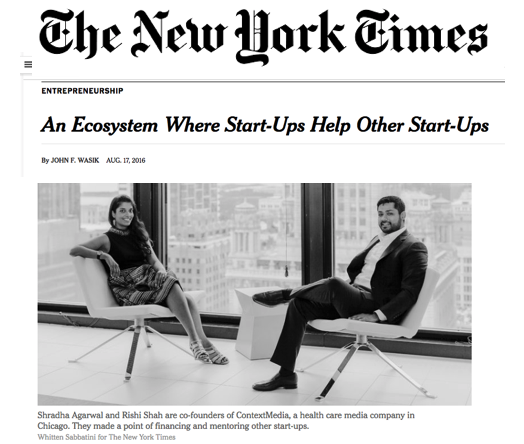 Phil de Guzman is Communications Lead at ContextMedia, a point of care patient education and communications platform. Below is a transcript of his November 11, 2016 presentation at the first Here’s How Startup Marketing Conference, where he shared his expert startup PR tips on securing media attention (watch the video here):

My name is Phil de Guzman, and I am Communications Lead at ContextMedia.

If you're not familiar with ContextMedia, we build health decision platforms that we deliver to the point of care, to better educate patients and to provide tools to physicians during the consultation. So today I'm gonna talk to you guys about how I managed nearly 200 features in two years.

As a one-man team, I was tasked with building our brand recognition, in Chicago and in the health tech industry. To paint this picture a little more vividly for you guys... I was in a meeting with one of our founders in early 2015 and he said to me very convincingly, "Phil, I think we need to be in the press a lot more. We could and we should be in the New York Times, wouldn't you agree?" And I was like, "Yeah, we should definitely do that."

And then he was like, "Great. So then you're good." And then I was off to the races.

I walked out of that meeting being like, "I think I just agreed to get us into the New York Times." So to paint the picture a little more vividly still, we were starting essentially from baseline zero. So at the time in early 2015, it can be easy to forget, but Context Media as a brand had very limited exposure when it comes to the media, especially at the national level. And we're also starting from baseline zero for me, I was also coming into this with a very limited experience when it comes to media relations and pitching out to the media, so I had my work cut out for me.

So here's what I did.

1. I defined my top three goals.

So in that conversation our founder said specifically we're really trying to develop our brand awareness in Chicago and then in the health tech community. So I took a step back and I thought a little bit more about what our goals would be here. So with the Chicago piece I tied it back to one of our main KPIs for the year. At the time we had right around 100 employees, a little bit more, and we're trying to more than double that. So really the goal of building that awareness in Chicago was to boost our recruitment. So one of my goals was to help boost recruitment and if I could do that I knew I was doing a good job.

My second goal was tied to that health tech piece. So our founders, while they had a great personal brand in the tech and entrepreneurship communities here in Chicago, if you were to pick up a trade publication, a healthcare tech trade publication and look around, we weren't anywhere to be seen. So I knew I really had to develop our thought leadership in that space because we're one of the fastest growing companies in that sector and you couldn't find us anywhere.

And then my third goal was to try to do that New York Times thing that we talked about.

2. I became a subject matter expert

So when I talk about being a subject-matter expert I, having limited experience, knew that PR just in general was, well those were some tall orders. So I broke it down into something that was a little more obtainable for me. I thought specifically about those two goals around recruitment and around building thought leadership in the health tech industry. And those were kind of the two main buckets, and I want to talk a little bit about the health tech bucket.

I took it upon myself to really double down and try to learn about this. So I subscribed to all of them and I just started reading up. And then as an exercise to become a subject matter expert, and I recommend this to anyone who's really trying to learn about something that they're not familiar with, I took it upon myself to start ghost-writing on behalf of some of our executives, unbeknownst to them.

So what I did, as an example: Ashik Desai is our EVP of business growth and analytics. He's a real whiz kid if any of you guys have met him. He's 23 years old, he manages a team of like 100. And as a result, he's one of the busiest people at our company. Given the fact that Ashik is just 23, he hasn't really had a lot of time to build his personal brand, which I realized was actually really important for his job and for our business, he leads our entire revenue team.

So I took it upon myself to write a couple op-eds to Ashik, on behalf of Ashik, and I sent them over to him and something... Like the email read something along the lines of, "Hey Ashik, I wrote this piece for you, I'm going to send it off to like these three publications so let me know if you have any notes." And this was really effective because I got his attention, obviously Ashik didn't want this thing going out with his name, without having reviewed it. And the second part that was really great was it started a really great dialogue between us. He called me and we bounced ideas and I ended up learning a ton from Ashik. And since then we've really developed a cadence where we're writing together at least once a month.

3. I balanced the content calendar across earned and owned media.

And this one was important because one lesson I learned really early is that you can't really control much of your content cycle when it comes to earned content and that's part of the game. But through this ghost-writing exercise with Ashik I learned that we could really generate a lot of content consistently if we focus on the owned piece. So I started to commit myself. I played around with a few ratios like, "For every X amount of earned pieces, we would write X amount of owned." But eventually what I ended up settling on was creating two pieces of original owned content, so thought leadership pieces on behalf of our exec team every single month.

This paid off in spades because one thing that I found out was, the more owned content that we started to put out there, the more earned opportunities just started to pour in. Through the exercise with Ashik within a few months we actually secured a column in MediaPost, and from that now countless other publications will turn to us when they're looking for a thought leader to speak on a specific subject and I just had a lot of inbound earned opportunities start to come in.

4. I connected my efforts with sales

So this might seem kind of random but it's really important because there are times, for any of you that work in PR and in media relations where your tactics are questioned, and it can be difficult to really define what those metrics are. I made it an effort to really be conscious of and be able to communicate for every single piece of content that we had go out there, how it was connected to our top line. And as long as you can do that you will always be in good shape.

A second fantastic side effect of this is, you really start to get the sales force on your side, which is important when you are advocating eventually for resources. I recently just started working with an agency for the first time, and I was able to do that because I had the support of the sales force. So I made it an effort for every single piece of content that we had published, I always sent it out to the entire sales team and they will sing your praises.

5. I got really lucky

Then number five, and this is probably the most important piece, is I got really lucky. I happened to join a rocket ship of a business that just gave me tons of fantastic material to pitch out and to write about. Along with that, I happened to work for founders who understood that the media relations piece is a long game. You only have so much control over it and for any of you that have worked in this, you know you can be just working so hard for months and not come up with anything and then a few weeks later after you quit it just falls into your lap and that's definitely a part of it too.

So here are the results.

Focusing on that recruitment piece, we were able to track that 28 full time hires over two years found out about us through earned content, and I was able to track that through pixels and sharing, and working with the talent team to add through applicant tracking system a field on how the candidate heard about us.

We had 34 bylines and thought leadership pieces placed and published since the start of 2015, and we have secured 186 earned placements in Inc. Forbes, Fortune, and eventually I got the New York times piece.