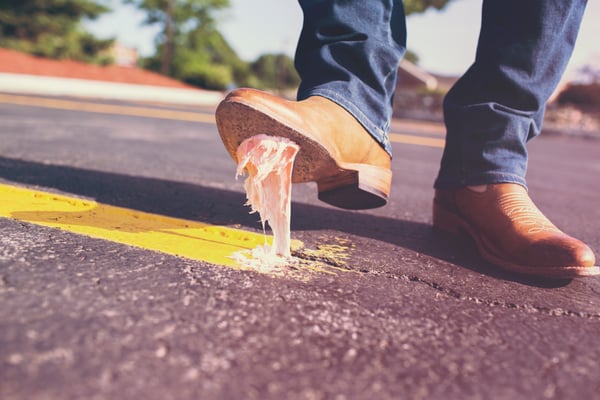 So this happened late Saturday night...

One of the all-around good guys in sports – Rich Eisen – tweeted about his hate for American Airlines.

I’m done flying American Airlines for quite some time.

I replied with this:

Stick with sports what do you know about running a massively complicated transportation network in a marketplace and environment over which you have little control https://t.co/HVEOnLRBfR

I was trying to be clever.

My tweet was an attempt to make fun of the “insidious logic of ‘stick with sports’” mobs that attack any sports figure who talks politics, #metoo, #blacklivesmatter, etc., as if they aren’t allowed to have opinions or influence over social matters that touch them.

The second part of the tweet, after the “stick with sports,” was trying to do two things:

1. Make my tone clear: I mean, it’s one thing to reflexively back the cruel, simple-minded, orange-skinned man-child you voted for, but who sticks up for airlines? No one! So I thought that part would make the sarcasm obvious. And I’d done similar natured tweets before here, here, here and here (Houston, we might have a problem...).

2 . Give a slight dig at reporters who seem to make a habit of complaining about airlines: Okay, I couldn’t quickly find any examples on a quick search. But trust me: it’s a thing.

But boy howdy did I fail on this one.

Unless I’m not picking up on sarcasm, it appears Josh has no idea what I experienced today but thinks I have no right to complain about absolutely shoddy service unless I know completely how to run the business. My bad, Josh. https://t.co/RpZCV2gPli

Yes, he noted the possibility of sarcasm, but if the joke’s not clear, it’s a fail.

And I felt like shit, since it sounded like what he went through was something more than a couple hours on the tarmac.

I replied weakly (I know, probably shouldn’t have replied at all):

It was actually meant mostly as a joke against the "stick with sports" complainers, and then maybe a bit of a dig on the trend of reporters complaining about travel. Apologies if underlying events were more extreme than the usual flight challenges.

And then the hordes of Eisen followers jumped in to let me know what a bad guy I was:

Josh is never allowed to complain about his meal at a restaurant unless he is a master chef himself.

Come on @richeisen you have no right to talk or experience anything that is not sports related.

Josh does not get fruit cup...

Stick to propellers you aviation genius

And did I mention this all started happening as I was going to bed Saturday night?

Anyway, what did I learn from this?

There is no sarcasm font, but there is a sarcasm hashtag.

Eisen mentions that he could see that I was possibly being sarcastic, but it wasn’t clear enough. If you really need to do that tweet (and you probably don’t), make sure you’re 100% certain it will be taken the right way (and maybe throw a #sarcasm at the end – it will feel like a cop-out, but it won't blow up in a bad way).

There is a type of person that rallies to the defense of those who don’t need it.

I get the desire to jump in to defend the defenseless. Like jumping in to defend a Parkland student getting cyberbullied by gun-rights activists. But what I don't get is what’s behind people who get so excited to support a straight white man who is a giant in his industry and who is beloved by everyone. Does it make them feel like they're his friends?

Just because someone you reply to has millions of followers doesn’t mean they’ll ignore your tweet.

Why do you tweet? For me, it’s not about engagement. Even my most geniusest tweets like this one don’t cause a ripple.

Generally it’s to support companies, people and causes I like, to share what I think is a funny take on something, and to build and strengthen relationships with folks I like, admire and work with. I normally get a few replies or likes, every once in awhile something more than that.

But while never in a million years would I have expected a response from Eisen, I should’ve known that it was possible. If I'd known this lesson, plus the earlier one about making sure your tone is clear, I would’ve prevented this unfortunate post from ever happening.

Don’t try to be clever after 10pm.

Former Buckeye football coach Jim Tressel famously said “nothing good happens after 10pm” in reference to player behavior. I think the same thing applies to social media. If you think you’re funny, but you've never actually been paid to be funny, it’s probably best to see if your idea still has you chuckling after a good night’s sleep.

Wait out the storm.

Don’t engage; the mob feeds on it.

Be careful before you JOIN A Twitter outrage MOB – know that it could have started with a quick sarcastic note between friends.

Again, I don't understand the personality type that jumps to the defense of those who don't need defense and to whom the offense has been slight, but it's not hard to see it happening in other cases.

What if that comment you think is outrageous is actually just sarcasm between friends? Slow your roll, watch and observe: it's probably not a fight worth having.

Influential people should understand the power of their influence.

Okay, for this one I'm turning the table.

This thing freaked me out for about 15 minutes, but that's only because the stakes were so low for me: I could see it wasn't a big thing and I'm in a good place.

I wonder what this experience would've felt like for someone who was not in a good place – when they're feeling alone, when they're struggling in school or at work, or when they're dealing with mental health challenges.

What if this person was just trying to connect with someone they respect, without any intention of hurting them, only to be turned on. Real damage can be done.

If you are fortunate enough to have influence on Twitter or other social channels, please use it responsibly, and know that you have a mob of people ready to pile on to any transgression – real or perceived – one that will keep piling on even after you forgot the tweet that started it all.

It hit me that this whole thing may be unintended result of my Twitter handle: Propllrhead.

That handle makes it sound like I love planes and am an aviation industry guy. I'm not.

I can't tell a Boeing from an Airbus.

And that "Propllrhead" may have been what caught Eisen's eye – a tweet from some guy who appears to be part of the industry that just failed him – it certainly caught the eye of the mob.

There were a few stressful minutes when this all first happened, but I've had some laughs talking about how it went down, and I have found this process of writing things out eye opening.

But I wish it hadn't happened, and I'm thankful that I'm in a place where the mean and inane (and yes, sometimes funny) tweets couldn't hurt me.

So please join me in making the following promises: