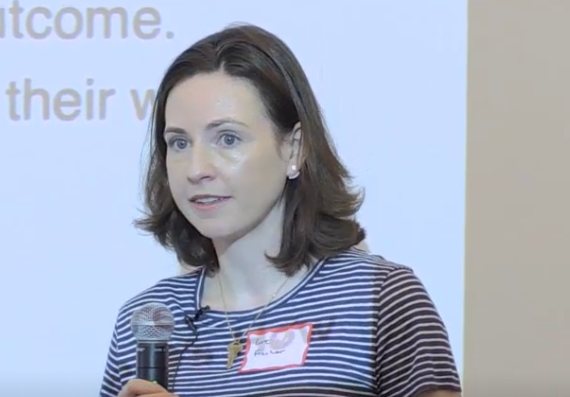 Liz Fischer is the Chief Marketing Officer at CityBase, a tech firm that works with government and utility clients to integrate with client databases through their unified API.

Read on for a transcript of her presentation from our April 16, 2019 Here’s How Startup Marketing Conference, where she describes how CityBase put their clients in the spotlight to become a leader in their industry.

I think that this is a relevant topic to really anyone because it's really about like an ethos and an approach to marketing that is kind of agnostic to what segment you're in – what industry you are in – as long as you have clients.

The way that they provide customer experience – you feel it in every way from pulling a permit to a paying parking ticket to essentially saving money on your property tax bill. We provide software to make all of that easier in the way that people want to do business with government.

You could also consider us B2B. Rather than business to business, we're selling directly to the public sector, but that does have some variation to how you might approach this for B2C.

I started in higher ed, so I have a background doing higher ed marketing communications. I worked for the University of Chicago for a long time. I think that where that's relevant is that I was used to telling really big stories.

If you are familiar with how the University of Chicago presents itself, they're very ambitious. They're very intellectual. They have very altruistic messaging. I was used to telling really big stories and carried that over to working with CityBase, even though they were a really young company when I joined.

I think the other part that's relevant about my background is also relevant to a lot of people on our team, which is that they're drawn to City Base because they work for the public sector.

We work with public servants who really care about the people that they serve and in doing good work. That's usually why they chose their career path.

I told you a little about the background of the company when I joined. When I joined we were very payment focused. We still are.

A lot of our work is in government and utility payments. You might experience it by paying a utility bill, a parking citation, or a property tax – either online or if you're a cash payer, paying at a kiosk.

1. We embraced and articulated a big vision

I think that the way that I approach that – which I hope is relevant to you guys – is we embraced and articulated the big vision.

This is coming from a space where we were comfortable telling big stories about our international workers at university, then coming to a technology company and thinking about, “Do we want to talk about the features and functionality of the platform?”

Instead, we wanted to talk about what are the biggest, oldest ambitions of our clients. They are typically to make public service work, make government work, and take away even the headaches that you might experience when you have to go to City Hall to do something when you would far prefer to interact on your phone or interact online.

What we look like when we're successful is that government is efficient and that people have experiences that are unique to their personal profile.

Because we have information across different government agencies about where you live, what your household profile is, what your income is, and whether you have school-aged children, we can be proactive in saying when school applications are due.

2. We recognized that tech is a means to an end

If we have information about your frequency of paying water bills and the amount due, we can also recognize households in crisis and start to say, "Alright, here is a payment plan that you might want to enroll in because we've noticed that you've become late on your bills."

That’s really the type of messaging that we started focusing on really early when we started becoming a more public facing company. And to that point, I think implicit in that is recognizing that tech is a means to enact.

Instead of going heavy on, "What are the features? Where is the button? Is the button red or blue?” No, it's really about, “What does this look like when we're successful?”

It's not really exciting to come into a room and talk about the different programming language that your software is built on or the page flow or how many options you have in the drop down menu.

It's exciting to think about reducing the burden for people to show up at City Hall to make interactions when it's expensive for them to take time off work to interact with the government. It's exciting to think about how we both move into a higher tax space and serve the people – the 20 to 30 percent of people in an urban market– who pay in cash.

This does very much translate to other companies. I've had conversations, for example, with a legal software firm that is kind of still in the transitional state with their messaging. They were talking about making it easier to, for example, pay bills or track invoices.

If you take that a step further, it's not necessarily about those features; it's about giving someone who went into law because they're passionate about it less time on administrative things and more time doing the work that they love.

So, more tactical approaches to this: We did and still do pitch projects based on the outcome. I remember a very, very large project that we took on that was especially large relative to our stage at the time.

We were talking, again, not about a more actionable website, but about the experience of residents being surprised and delighted when they interacted with their city or county online.

We still do that today. It's about giving people the tools to fulfill their goals and ambitions, and to accelerate their initiatives that might range from financial literacy for the population and the government or just to reducing lines. Or to accelerating the pace at which people get business licenses and therefore generate more economic activity.

3. We pitched projects by focusing on the outcome

We also always focus on our messaging and our approach to marketing, publicity, advertising, about our clients accomplishments over our own. We're not putting out press releases that say, "Oh, we won this business."

I think there's probably some utility in that, but I think it's generally a dated model that is replaced now by telling more authentic stories and telling stories about the clients' accomplishments, not the new piece of business that you won.

We do that in some really practical ways – case studies are a great way to do it. But even more so for us, it was about whenever we saw publicity. It was about how we can pitch an article that's about the new technology or the higher level of service that this government client gave to their residents.

4. We gave our clients the stage to promote their wins

We were content with not being named in a given article. If another client wants to find out who was behind that platform or that software, they can give the CIO of a certain city or state a call because it is also a very tight peer network.

That goes to another point, which is that peers who are in the business community that you're selling to – whether it's government or another industry – they care most about each other's accomplishments, each other's work, each other's successes, and each other's trials and errors.

Just cut out the middleman, which is you, and allow them to talk to each other, whether it's at a conference or whether it's just by making an introduction.

5. We gave our industry its due praise

We gave our industry its due praise. I think that this particular topic of putting your clients first is part of a bigger ethos of making sure that you're authentic in your communications and that you're recognizing the true struggles and efforts of the business community that you're working in.

I think especially in our space – in government – a lot of people have a perception that people who work in government don't care or they're not good. They do care. They are good.

They're working in encumbered systems. They're working often with tight budgets and legacy technology. And they're making really creative solutions to still do their job well and still serve the public.

Some of the results that we've had are that we do frequently have panel topics accepted because even the panel – the conference organizers– recognize that peers want to hear from each other rather than from vendors.

It's a great way for us to facilitate conversations that are big and important, and be part of them in a way that is true to our ethos and that isn't super aggressive. We have generated a lot of publicity, and we often have our clients front and center in those pieces because that's also what the journalists want to write about.

I think probably more importantly, the company that sells it has been extremely successful and the projects that we do have been successful because we are working toward this shared vision with our clients.

I think that we've, through this method, ended up building a brand that's very true to ourselves, that our employees feel proud of, and that our clients feel drawn to and affiliated with. That generates a lot of good will in our space and a lot of word-of-mouth in an industry that is very driven by pure recommendations, collaboration, and experimentation.