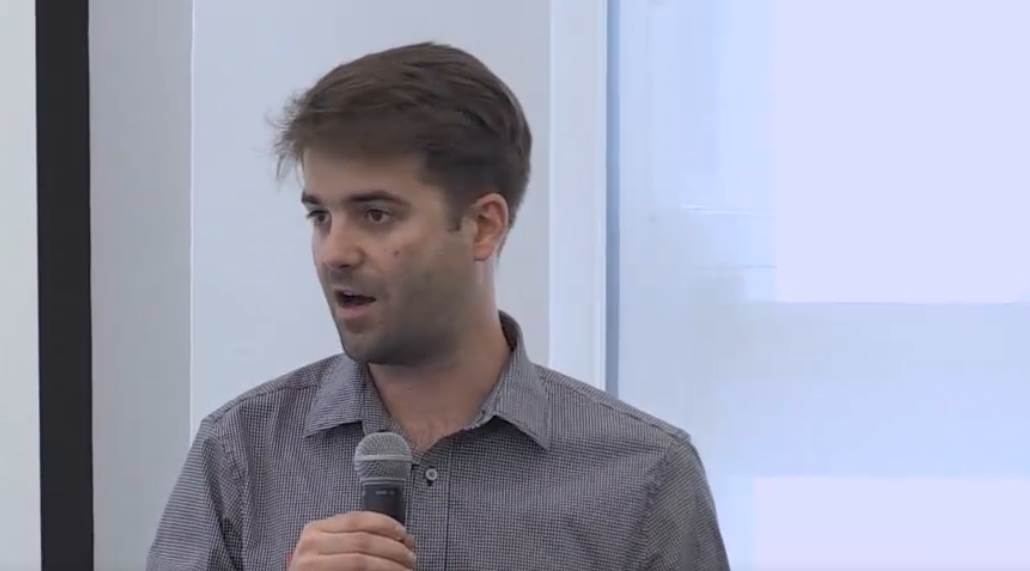 Kyle Swinsky is the CEO of AMOpportunities, a Chicago-based startup that helps international doctors and medical students find clinical training opportunities in the United States.

Read on for a transcript of his presentation from our April 16, 2019 Here’s How Startup Marketing Conference, where he describes how he refocused their work around shared values rather than improved features to optimize their product-market fit internationally.

My name is Kyle Swinsky, CEO of AMOpportunities. To kind of give you some background about our company, we've been around a little bit. We help international doctors and students find clinical training in the United States.

Basically, there's a physician shortage and international physicians take up over 27 percent of the physician workforce, and over 37 percent now are residency programs where the first training are international.

There's more and more a need to bring them into the system. What our company does is we're their first entry point.

A little bit more about our background. We're based here in Chicago. We're just down the street. We come out of the University of Chicago. We won the New Venture Challenge a few years ago, and we raised two rounds now of financing.

But what's really interesting about this story is that we've done this for almost seven years now and over that time, we're never able to get into the Chinese market.

We have visitors from over 75-80 countries now, and we just weren't able to get into the market. And what the success of this is, after this problem was found and we went and did this, we were able to get our first customers from that market.

And really, to go more into it, it really all started out where we said the Chinese market's a little different. The typical customer of ours is either a medical student who wants to come into the system earlier on, or a physician in their late 30s / late 40s / 50s who's practicing in their own country and wants to get into the system somehow.

On the Chinese market, we first had a censorship of our advertising. We weren't able to get directly in front of the customer the way we normally do. We're really relying on Facebook advertising and Google for about half of our customers.

1. We hired a local marketing firm to help reach the Chinese medical students we needed to connect with

What we did was we found an agency through the University of Chicago – actually, one of our investors pointed them out –that was doing something parallel. What they were doing at the time was they were helping law students from the Chinese market go to the UK.

We spent about two years before this trying to get into the market. What we originally thought was it was going to be via advertising. We found a consulting agency to get ads up and that wasn't working. We said, "Let's find a parallel business in another pre-professional / professional industry and see what would happen."

At the time – this was already a year-and-a-half ago – we didn't know what was going on. Why wasn’t our advertising through these new channels working? Is it really the market or is it really our product?

2. We developed marketing materials that focused on how our product would help them instead of just features of our product itself

This agency, what they did for the first six months is they went to over 50 medical schools that teach medical English to really see through teaching English, if these students want to come potentially to the system, do some research with them.

When they started approaching the schools, they found that it was more of a smaller population, but it was very scattered. It also led to us finding out that there was a much larger market of the physicians in China.

We found out right away that Chinese physicians – to get promoted in their two-tier healthcare system – they need to get retrained. About three months into the project, we had two different markets that we were looking into, which were the medical students at these 50 schools.

And then we were looking into the physician population – really finding hospitals that want to send cohorts of doctors to the United States for this retraining.

In the final three months of the six-month marketing pilot, that's when we really found that the product was more of the problem in the market.

The product that we sell is a four-week block of short-term training. In all these health systems, they created these four-week blocks for us and that was an all one-size-fits-all for our customers in our other markets where they said, "On-demand. Same thing over and over again. It was very easy for health systems because it was a one-size-fits-all."

But this one size did not fit the need of the Chinese market whatsoever. They were not used to coming into this four-week blocks as is. They also didn't know how to find them outside of working with specific agencies that typically come around with one contract and say, "Hey, I'm the Harvard representative," or, "I'm the University of Chicago representative."

Then we had our re-approach after the six months and what we decided to do was create a whole new product for this market. And what we thought of was, if agents are going around in China with these one contract – one institution – we found that the problem we have was too much choice.

If you come to our marketplace as it is right now, we have over 400 sites around the country hosting students and the doctors. That was not the way for them to enter into the platform.

3. We secured a cohort of eight Chinese medical students who came to the U.S. for a customized one-week boot camp in Chicago

What we did was we created this boot camp at one of our hospitals here in Chicago.

We work very collaboratively with that hospital and said, "What we want to do is advertise just you and we want to bring a group of visitors just for one month."

And our partner out there then decided to go around to those two markets again – the physician markets, the student markets – and was really quickly able to get 15 to sign up in that month right there. The decrease was just with the visas and timing.

Once we set this up, we were really excited about it because we wanted to learn a lot more about this cohort. After six years, the demand was very high, but there was a product-market fit issue.

4. We held a welcome event, orientation, and farewell reception for the visitors

5. We recorded all of the students and spent time speaking with them about their rotation

We had them do orientations. We brought them to the hospital before they were going to go there for the programming, social programming, and medical school tours. What it really led to was that what they wanted more was branding.

6. We hosted a retro meeting where we discussed what worked, what didn’t and what we learned to improve upcoming offerings

After we had all these events, we started interviewing the cohort and learning more about why they picked this. What was the real reason they couldn't find us the other way?

And we found out that ultimately the market was a lot different. It is interesting to us because maybe we're not penetrating our other markets as much as we can if we're selling this product the same way each one.

7. We are now working with that same firm to bring two more groups to the U.S. for clinical rotations, certification programs and university lectures

With China, we ended up creating more of these boot camps now for July and August. We already have 38 in our next one, 50-plus for the next. The idea here is that the Chinese market really was little more for branding.

And I think the most interesting thing we found in our interviews is that usually our customers come because they want to interact with the US patients. They want to see what the healthcare system is like.

They didn't want to talk to the patients at all. They were here to see what the hospital looked like. They care about the name recognition of the hospital to bring back home and say, "Hey, you know what, I visited this hospital."

And it really gave us a great information about re-aligning our product because, while this was a great fix for us in the Chinese market, with our other countries that we're in, we're really starting to see that we need to differentiate our products much more to dig deeper and deeper, especially moving away from these early adopters that we've seen this first six years.

Going more into the details, what we learned is that we really need to listen to our customers more. We built a platform that was really meant for what we thought a platform looked like – being in the United States, seeing what platforms were being developed.

We thought on-demand, very quick, one-size-fits-all was the solution, but that only got us the early adoption of our markets – early adopters being those that really knew what they needed at the time.

But now, we're finally developing new product lines, not just for the Chinese market, but for our other countries that we are in. But I think it sounds like it's an easy problem and an easy solution, but for us it was very profound. Mainly because it really made us as a company re-evaluate how we sell and how we look at how we align our product-market.

So just because we've had 2600 visitors come through to the United States doesn't mean we have the product-market fit. I think that moving forward, what we've been able to do is take an "a la carte" on-demand platform.

We're going to make product-facing pages that segment the product into more of these boot camps – different pathways of product lines as we're doing research in these other markets really see if that was the problem.

Already, we are seeing that that was the problem. We just hired a director of partnerships who's worked with agents in the University of California system for over 10 years, and he's had existing relationships with agents such as this agent in China for many years.

And what we've learned is he's signing over five contracts a week with these agents. The agents are telling us, "This is the truth." It was a real awakening for our business to say, "Hey, just because we had traction, the revenue, we're growing, there's a lot more that we can do."

I think the lesson there is now that we put this product pages up, we're going to learn more and try to figure out how to better fit the product.

But I think the take home is that we're not changing anything in our operations. The students will still find these short-term blocks of training; we're just re-packaging it in different ways because each market sees it a little differently.

4 Ways to Get More Impactful Media Coverage
What Makes a Good Award Nomination: Advice from a Judge
Previous Post Next Post