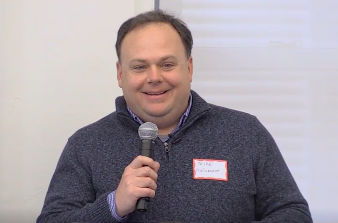 Mike Harmon is the Director of Marketing at NuCurrent, a Chicago-based startup that specializes in wireless power.

Read on for a transcript of his presentation from our April 16, 2019 Here’s How Startup Marketing Conference, where he describes how he used Lean Canvas to prioritize markets.

My name is Mike Harmon. I am the Director of Marketing at NuCurrent. NuCurrent was founded in 2009 and specializes in wireless power.

The "NU" in NuCurrent comes from Northwestern University. We specialize in wireless power. We are venture-backed. For about the first eight years of our operations, we were focused on research and development, developing the antenna technology that allows power to be transferred over the air versus via a connection.

Over the last two years, the team has developed. I joined a year-and-a-half ago to focus on commercialization. Our technology is in over 300 million devices for multiple Fortune 100 companies.

As far as I'm concerned, I grew up in Indianapolis. This is my first job here in Chicago. The previous two were venture-backed firms in Indianapolis that got into the multimillion dollar range as enterprises. And I feel pretty good about our prospects to do that with NuCurrent as well.

And, with that being said, I'll be hiring my first marketing team member, probably in the next four to six weeks. So, if that's something that's an interest, by all means, take a look when that comes live.

The thing here is how I use Lean Canvas to prioritize market selection. Is there anybody here that has used Lean Canvas before? One, two, three, four. Well, this is maybe an opportunity for folks to learn something that was really impactful to me.

We don't have the luxury of just focusing on one or two niches, or one or two markets. We actually are distracted by many, and it's what makes my job both exhilarating and terrorizing at the same time. Because you have to focus your resources.

And so, these markets are forming. I can't go out and buy market research that says, "Tell me about this market." We have to figure it out on our own. That stuff is limited, and if it does exist, it's incomplete.

As I mentioned, anybody who's involved in start-ups, your resources are limited. That's the first "Duh." And then, it's important to prioritize and focus. That's the second "Duh."

We all are doing this and it's obviously something that is part of our everyday realities. But we wanted to develop a way to analyze this disparate information, these disparate markets in a structured and thoughtful way.

Okay, folks, I get it. They're all great markets for us. But we do have limited resources and we do need to prioritize our focus, so, let's go about doing that. After a conversation with our CEO, Jacob Babcock, when we were just talking about this challenge, this boiling of the ocean that we were trying to do, [we asked,] "How can we make this work?"

We decided that a modified version of Lean Canvas would be a very useful approach for us. Lean Canvas is a business planning tool that's basically helping folks map out your business plan on a one-page canvas.

It covers the problem, the solution, what existing alternatives exist out there – things like key metrics and cost structure. Then you get over to the marketing side and look at the unique value proposition, channels, the segments, and revenue streams.

It basically says, "In 20 minutes, dump out of your brain as much as you know about this market or this business, and put it on the canvas. Then, go away, and come back and do it another week later. And then, a week later, you start to refine and shine up what you understand about this market."

2. We hacked the canvas to suit our needs

We took that principle, we took that concept, and we hacked it to suit our needs because, like I said, we're not going after just one.

There were a couple of things that we really wanted to look at specifically within our canvas, and that was in the unfair advantage segment of the canvas. We're going to take a look at it in just a second, but that helped us identify both our functional and our technical benefits within each and every segment that we were looking at.

And also, looking at the customer segments allowed us to identify the key players but also think about things like design times. It's a terrible time for us to talk to phone companies whose design cycles are in the fall in the summer. That's too late.

We're able to actually map out their design cycles as part of this to help us determine our cadence of when we went after different segments.

3. We did the hard work as a cross-functional team

The last piece: we did the hard work as a cross-functional team. We brought a bunch of smart people together, and we did two rounds for nine markets.

Here's what this canvas looks like. On the left-hand side, this is really more customer-related information. You have the problem that you're solving, the ways in which your solution addresses that, and how you might measure the solution against those problems.

When you're looking at the problem, you also have the existing alternatives that are available to folks that might be looking for your product.

The cost structure and revenue screens –we honestly didn't spend as much time on it, but if you are doing a business plan, if you're starting a company, or if you're an early stage company, these are absolutely key attributes that you want to be digging in on. It wasn't as critical for us based on the assignment.

Where we really started to find gold was in the UVP and the unfair advantage. Those were the areas where we really dug in for each of these segments.

Within the segments, we were also able to talk about, "Who would be the early adopters that would be coming for technology folks who position themselves as technology leaders that might want to bring something enabling – like wireless power – into a technology?”

We now have this road map for how we're going to go about these different segments for the market-specific activity quarter by quarter, and actually taking into consideration their design cycles and the resources that we need to do that.

We didn't really boil the ocean. We simply charted a course that said, "Hey, this is sensible and this is understandable. And everybody in the company knows that we're going to go after this market, then this market and this market. And the why behind all of that as we go forward."

One of the unexpected bonuses that came out of this was that it really helped with messaging.

When we started going through the canvas and addressing all of these attributes of the markets. Things like the solution, the UVP – the unfair advantage – those started to really fuel the development of messaging and content creation. That was a big bonus.

This being a startup conference, I think that this Lean Canvas approach is helpful whether you're responsible for marketing or the business at large. This is a fun and easy tool and exercise that you can go through in 20 minutes every other week. You can refine and shine up the plan, and it made a big, big difference for us.

Now I don't have to field those emails that come in that say, "Hey, we should look at this segment now." We now have a road map that says "No, we're actually going to. This is our process, and here's our process for anything that comes in that we might want to introduce into our flow."