How to Be an Expert Without Being Boring

Anyone who’s watched a TED talk knows that you don’t have to be boring to be an expert. Unfortunately, when startup founders and CEOs try to translate their best ideas to the written word, the spark often gets lost.

The result: a dry, dull article that doesn’t come close to doing justice to their ideas.

But there’s good news: sounding boring on the page is a problem you can fix!

Here, I’ll outline four writing strategies that breathe life into your words so that the excitement of your vision shines through.

First of all, I get it: fancy words are fun.

As a child, I maintained a marble notebook called the “good word dictionary,” in which I listed the most delicious words I came across. Entries included “succulent,” “rapacious,” and “lumberloid” (which, according to the Google search I just did, seems to be a word my cousin made up to prank me – damn you, John Working!).

“Lumberloid” is not, in fact, a word

The problem with fancy words is that they tend to be long and less common. Readers may take a split second longer to process their meaning. In the course of a piece, those fractional seconds of confusion add up to a reading experience that feels like work.

After a while, they’ll abandon your piece.

The solution: use short words and concrete language. Avoid jargon unless it’s absolutely unavoidable. When in doubt, pretend you're explaining something to a precocious eighth-grader.

Here’s an example of the clarifying power simple language can have:

Version 1 (fancy): “It is a way I have of driving off the spleen, and regulating the circulation.”

Version 2 (plain): “It’s how I get my blood pumping and burn off a bad mood.”

Sure, the first one sounds nice (I mean, it was good enough for Herman Melville), but its meaning isn’t as clear as the second one’s.

When you’re trying to convince potential customers, partners, investors, or employees that you’ve got something worthwhile to say, clarity matters.

If it feels like I’m speaking this blog post into your brain as you read it, that’s because I’ve managed to capture my voice on the page. 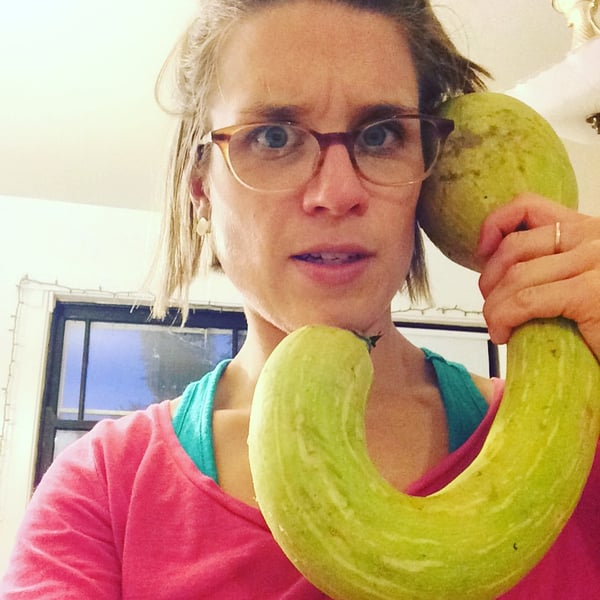 Me, speaking into your brain via gourd phone

Notice how informal it is! How I’m using sentence fragments! How I’m letting myself get excited (as evidenced by these exclamation points!)!

Capturing your voice on the page is one of the surest paths to conveying expertise in an engaging way.

The problem is, it’s hard.

In fact, if you don’t write for a living, trying to capture your speaking voice in written words can seem impossible.

As a result, many startup founders and CEOs default to another sure path to conveying expertise: formality.

Formality is the hallmark of the experts in textbooks and narrators of nineteenth-century fiction. We all read these expert texts in school and internalized the lesson that formal prose = expertise.

The problem with formality is that it’s often abstract. Formally worded arguments are harder for readers to visualize and therefore harder to understand. The result: reading your words feels like work, which is much less fun than hopping over to Twitter or Instagram. And so (again) you lose readers.

Here’s an example of how a voice-focused rewrite can liven up and clarify a passage.

Version 1 (formal): Attempting to convey ideas through the medium of written words, when you lack expertise in the field of writing, can feel like an insurmountable feat.

Version 2 (voice-driven): If you’re not a professional writer, getting your ideas across on the page is hard – impossible-feeling, even.

The key thing to remember is that not all “voicey” writing is super-informal. It just sounds human. Done right, it sounds like you, the human who happens to be an expert on the topic at hand.

Remember that story about my nerdy word notebook?

I told you that on purpose!

Storytelling is a great way to make expert writing more engaging. Including anecdotes in your expert writing – and even structuring an entire piece like a story – can help you convey your expertise in two ways:

Here’s a look at how including a story can make an explanation more engaging:

Version 1 (no story): Organizations looking to improve operations can do so by adopting agile methodology in various departments. Born in the world of IT, agile practices today can help marketing, sales, and customer care teams learn faster what works and what doesn’t.

Version 2 (story): Organizations looking to improve operations can do so by adopting agile methodology in various departments. We helped one client start using “scrum” practices on their marketing team, and they saw 50 percent improvement on SEM ads and 25 percent better click-through rates from SERPS – in just the first month!

That story both illustrates the writer’s expertise and offers a kind of case study that readers instinctively insert themselves into. It’s hard to read that story without wondering what similar results would mean for your bottom line.

There’s a truism in marketing that we buy from people we know, like, and trust. Telling stories in your own voice helps your audience get to know you; using plain language helps them trust you.

Why? Because it sends the message that, even though you’re an expert, you’re not a know-it-all. Heck! You’re just a human like the rest of us. And while most of us don’t like to be told what to do or think, we do like to make connections with other humans.

One of my favorite examples of an expert showing vulnerability is then-President Barack Obama’s appearance on Zach Galifianakis’s “Between Two Ferns” to promote the registration deadline for the Affordable Care Act.

Barack Obama on "Between Two Ferns"

In that video, the literal leader of the free world lets himself be the butt of several jokes in order to get his message to an audience he considered important – the younger generation likely to be watching “Between Two Ferns.”

By letting Galifianakis’s host character mock him, Obama sent the message that he was aware of his shortcomings – perceived or actual – and that those shortcomings didn’t make him any less effective as a president.

Here’s how vulnerability can look in writing:

Version 1 (no vulnerability): We helped one client start using “scrum” practices on their marketing team, and they saw 50 percent improvement on SEM ads and 25 percent better click-through rates from SERPS – in just the first month!

Version 2 (vulnerability): I used to think agile operations were all hype. I refused to look at clients’ team structure – the “how” of their operations. I insisted that we could get results by focusing solely on the “what.” I was wrong. On my first agile project, I helped a client use “scrum” practices on their marketing team. They saw 50 percent improvement on SEM ads and 25 percent better CTRs from SERPs – in just the first month!

Vulnerability is especially powerful when it’s paired with anecdotes (as in the above example). It lets you align yourself with your audience (“I, too, was a nonbeliever”) and shows you coming around (“but then I saw the light”).

This not only makes you more likable, it gives your audience permission for not knowing something. It gives them a clear path toward knowledge that will bring them in line with how experts think about the topic.

(For another great take on vulnerability, check out this post, in which Propllr’s CEO shares an embarrassing Twitter interaction to illustrate that even he sometimes messes up public relations.)

The Shortcut to Being an Engaging Expert on the Page

Of course, doing all these things in your writing is a lot of work. And most startup founders and CEOs – unless they’re in a writing-related field – don’t have time to do their expert-level jobs and write about them.

The solution? Hire a ghostwriter to do it all for you. Ghostwriters are experts in writing and so can channel your expertise into words (with your input and approval) so that your writing makes you sound as smart and visionary as you actually are.

Stay tuned on more about ghostwriters. In two weeks, we’ll be taking an in-depth look at how to know if you can benefit from working with one.